Hayes raises about $1.3 million in her quest for congressional seat 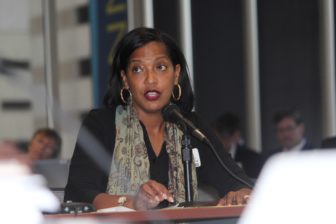 Jahana Hayes testified recently before the state board of education

Washington – Jahana Hayes, a political newcomer vying for the 5th District congressional seat, has pulled in nearly $1.3 million in campaign donations since she announced her candidacy in May.

Hayes, a former national Teacher of the Year, raised about $790,000 for her campaign in the last quarter, the latest filings with the Federal Elections Commission show.

Hayes’s Republican opponents, former Meriden Mayor Manny Santos, reported raising about $52,000 in his bid for the 5th District congressional seat and had about $14,000 in his campaign as of Sept. 30.  Hayes ended the quarter with more than $610,000 in cash on hand.

Hayes’s personal story has captured national attention – she grew up in public housing in Waterbury and was a teen mom – and many of her contributions come from out of state.

Hayes’s campaign has also raised a sizable amount of money, about $240,000, from political action committees, or PACs, something candidates who are not incumbents usually find hard to do.

PACs representing a wide range of interests — from defense contractors like General Dynamics to teacher’s organizations like the National Education Association — donated to Hayes’s campaign. So have a  number of Democratic organizations and progressive groups, including the Congressional Progressive Caucus, MoveOn.org. and Emily’s List, which donates to pro-choice candidates.

Hayes has also received contributions from at least a dozen members of Congress, including Reps. Jim Himes, D-4th District, and Rosa DeLauro, D-3rd District, who hosted a fund raiser this summer for Hayes’s primary opponent, Mary Glassman. Each gave the campaign $2,000.

House Minority Leader Nancy Pelosi also contributed $2,000 , as did the No. 2  Democratic leader in the U.S. House of Representatives, Minority Whip Steny Hoyer, D-Md., who came to Connecticut last week to hold a round table with Hayes on health care.

Hayes has said House Democrats need to “usher in fresh faces and new leadership so that we represent diverse perspectives.”

“There is something to be said for the knowledge and experience of our current leadership, however if we are not opening the doors now to welcome future generations to the table it is to our peril,” she said in an interview this summer.

Both Pelosi and Hoyer are in their late 70s. Some House Democrats — and younger Democratic candidates seeking office this year, are expected to push for younger leadership in the new Congress.