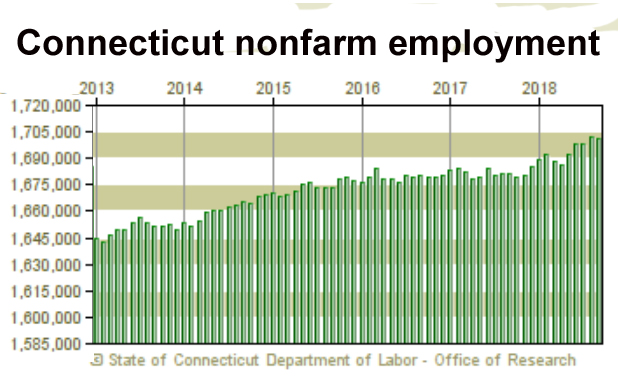 Connecticut’s unemployment rate dropped to 4.2 percent Thursday despite the loss of 500 jobs in September, as labor officials announced August job growth was larger than originally anticipated.

The state Department of Labor reported 3,300 non-farm jobs gained in August, triple the number originally reported. This drove the jobless rate down by one-tenth of 1 percent.

“Despite the drop of 500 jobs in September, Connecticut’s labor market appears strong,” said Andy Condon, director of the labor department’s Office of Research, who added that job growth for the year is up nearly 20,000 positions. “Only the trade, information and government super-sectors show annual job losses.”

The private sector has fully recovered and is at 113.9 percent of where it stood before the last economic downturn. But Connecticut’s government super-sector, which includes municipal, state and federal posts as well as jobs at the two tribal casinos in New London County, remains well below pre-recession levels.

Five of the state’s 10 major job super-sectors tracked by the department added jobs in September, led by construction, which was up 1,000 positions. Gains also were reported in: manufacturing; financial activities; government and other services.

The trade, transportation and utilities super-sector lost the most jobs in September, down 2,300 positions. Losses also were reported in: leisure and hospitality; information; education and health; and business services.

“When we lose sight of the significant progress made in our recovery, people become susceptible to false narratives,”
Gov. Dannel Malloy

“While it’s easy to get distracted by short-term gains and losses, doing so risks missing the important bigger picture,” Malloy said, recalling that unemployment stood as high as 9.3 percent in December 2010.

“When we lose sight of the significant progress made in our recovery, people become susceptible to false narratives,” the governor added. “The reality is that businesses and people are not leaving the state in droves. They’re deciding to set down roots and call Connecticut home because they understand that this is a great place to work, live, grow a business, and raise a family.”

Though the jobless rate is down to 4.2 percent, CBIA economist Peter Gioia noted that that number remains the highest in the region.

“So we have a mixed picture because despite growth, we see continued volatility in job numbers and a real need for stability,” he said.