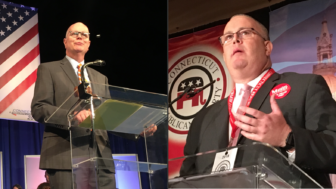 Kevin Lembo and Kurt Miller agree that the state comptroller must be Connecticut’s chief fiscal guardian.

What they don’t agree about is whether Lembo has done a good job in that role over the past eight years.

Lembo, a Guilford Democrat, touts a record of reforms that have forced state government to save more than $1 billion in the past year alone, made budget, payroll and pension data easily accessible online, saved millions of dollars in prescription benefit costs, and provided checks and balances on Gov. Dannel P. Malloy and legislators from both parties.

Miller, the Republican nominee and Seymour’s first selectman, counters that Lembo has failed where it counts the most: using his bully pulpit to speak out against the irresponsible policies that only exacerbate the legacy of debt this generation will leave Connecticut’s children.

“The comptroller has to be an independent voice inside state government,” Lembo told the CT Mirror. “You have to have a track record of standing up and speaking the truth, even at a potential loss to yourself.”

As evidence, Lembo points to Malloy, a fellow Democrat with whom he has bumped heads on several occasions during their respective tenures, both of which date back to January 2011.

When Malloy vetoed a bill to implement a Lembo plan for an online system to track the effectiveness of economic development grants to businesses, the comptroller wouldn’t let the issue go. That eventually led to a Malloy executive order creating an economic development transparency program still under development.

They sparred in January 2016 over the best way to smooth out spiking state employee pension costs in future years.

And while Malloy was the first official to recommend shifting billions of dollars in state pension contributions until after 2032, Lembo first revealed how much that deferral would increase costs over the long haul. 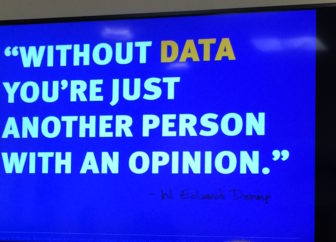 And though Lembo never referenced the governor in his report, the comptroller’s Powerpoint presentation wrapped with a quote from famous statistician W. Edwards Deming that read: “Without data, you’re just another person with an opinion.”

Miller conceded Lembo has challenged the governor and legislature — but not often enough, he charged, and not at the right times. And the pension deal was a mistake, he added.

That deal, ratified by the legislature and state employee unions in early 2017, will try to keep annual pension contributions — which currently stand at $1.2 billion — from exceeding $2.3 billion between now and 2032. One report warned the cost otherwise could skyrocket beyond $6.2 billion by 2032.

“If people understood the impact of that, I don’t think they would be eager to send the same people back” into state office, Miller said.

Lembo and Malloy would clash again when the comptroller voted at the May 2016 State Bond Commission meeting against the governor’s proposal to award $22 million to help the nation’s largest hedge fund expand its operations in Fairfield County. Bridgewater Associates of Westport managed more than $151 billion in assets at that time.

“If you have the guts to speak out, you can get a lot done,” Lembo says in a campaign television ad. “So when the governor tried to give the world’s largest hedge fund millions of taxpayer dollars while working families struggle, I spoke out to stop him.”

But Miller asked why Lembo didn’t vote“no” more often at commission meetings over the past eight years as Connecticut has borrowed millions of dollars for community-based projects that it simply can’t afford.

“He’ll cherry pick things. He’ll push back when he thinks it’s fiscally prudent,” Miller said. “Where was ‘no’ vote on (funding for) splash pads and grocery stores.”

But Lembo said that while he has a track record of challenging both parties, Miller has none.

When asked by CT Mirror when he publicly challenged a fellow Republican on Seymour’s Board of Selectman or Board of Finance on a local budgetary matter, Miller said there was “nothing of major significance. We don’t have a lot of fiscal fights in Seymour.”

But the four-term first selectman pledged to set a bipartisan tone of fiscal accountability on Day One.

“We’re kind of a rudderless ship in Connecticut,” he said, adding his office would immediately develop a long-term fiscal strategy for the state, rather than simply react to legislators’ and the governor’s fiscal proposals. “We can’t just bounce from idea to idea. We need to put together a sound plan that moves this state forward. The comptroller needs to help with that vision.”

Miller said he is worried about Connecticut’s fiscal future regardless of the outcome on Election Day. Even if Republicans take control of the governor’s office and the legislature, there will be a temptation to add programs.

House Minority Leader Themis Klarides “is like a big sister to me, but we’ve had that conversation. I’m probably going to be her biggest critic.” But Miller quickly added that neither Klarides nor any other Republicans should take that personally. He plans to be the Democrats’ biggest critic as well.

Miller added he also is prepared, if necessary to vote against major school construction financing packages on the bond commission — hundreds of millions of dollars borrowed at once to finance dozens of local projects.

Whether he votes “no” would hinge on whether the legislature prioritizes projects that ensure student safety, and rejects those that duplicate services and discourage regionalization.

Miller added he would develop a legislative scorecard and rank all lawmakers on nonpartisan principles of fiscal responsibility.

But Lembo said he’s already reached across the political aisle — and had success.

He challenged lawmakers throughout much of his tenure to recognize the roller-coaster nature of the state’s tax system, and to do a better job saving. A new volatility cap enacted in 2017 requires the state to save more when income tax receipts tied to investment earnings surges beyond a threshold level.

“That didn’t happen by magic. It took a lot of collaborative work,” Lembo said.

The ‘muzzle’ is lifted

The 1991 legislature — in an accommodation to then-Gov. Lowell P. Weicker Jr. — stripped the comptroller’s ability to modify the governor’s monthly budget forecast.

This forecast is shared with bond investors, Wall Street credit-rating agencies and others that review the official financial statements of state government.

Since last November, the comptroller again has the last word on Connecticut’s fiscal condition.

“I think people know I’m not going to try to trick them, or score political points,” Lembo said.

Miller countered he also would have no hesitation forcing the next governor to craft a deficit-mitigation plan if the comptroller’s office is convinced a significant budget shortfall exists. “We need to take the politics out of the state of Connecticut,” he said. “The numbers are the numbers.”

Lembo also points to his experience running an office with about 280 employees. In addition to serving as a fiscal watchdog, the comptroller pays the state’s bills, administers state employee pension benefits, and purchases more than $1 billion annually in health care for public-sector workers, retirees and their dependents.

To help residents follow this more closely, Lembo launched OpenConnecticut! a website that provides visitors with data – updated daily – on state spending and revenues. It has been expanded considerably during his tenure to include data on bills paid, pension and payroll data, and a do-it-yourself revenue calculator that lets visitors experiment with different options to fund state operations.

Ultimately, both candidates said they anticipate the next four years will be among the most challenging for the comptroller’s office.

“It’s not my job to make the governor unhappy. It’s my job to call the balls and strikes as I see them. The math is the math,” said Lembo, who had explored a run for governor before opting to seek a third term as comptroller. “I really love the work I am already doing. It is challenging and exciting and important.”

State social services field staff can telework about 70% of the time through December under a new ruling.