Malloy offers Lamont a blueprint to balance next CT budget 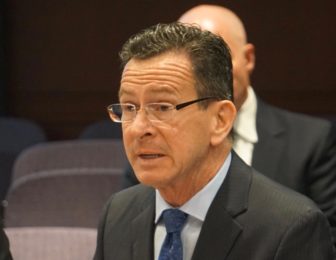 “These options would be difficult, and would involve real sacrifice by various constituencies,” Office of Policy and Management Secretary Ben Barnes, Malloy’s budget director, wrote to Lamont. “The Malloy administration did not repeatedly put hard choices like these on the table without significant forethought, knowing that many in the legislature may have preferred to take a different approach including more revenue. But if the General Assembly is willing to work with you on a combination of such ideas, closing the (fiscal year) 2020 shortfall without a tax rate increase is achievable.”

Malloy also suggested Lamont could consider tolls, legalizing and taxing recreational marijuana use, and imposing a fee on recently legalized sports betting, but did not specifically endorse or criticize these alternatives.

The post-election deficits have shrunk

The “shortfall” Barnes cited involves an administration projection that state finances, unless adjusted, would run $1.7 billion in deficit in the first fiscal year after the election. And the potential gap approaches $2.37 billion in the second.

Those numbers were even more bleak a few days ago.

In a forecast issued in September, the legislature’s nonpartisan Office of Fiscal Analysis projected a $2 billion deficit in the first fiscal year after the election, and a $2.4 billion gap in the second.

The deficits shrunk somewhat because of a new revenue forecast released Tuesday that upgraded expectations for income tax receipts and other revenues for this fiscal year, as well as for the coming biennial budget.

But even with that good news, Malloy had to help Lamont find ways to wipe more than $4 billion in red ink off the state’s books over the next two fiscal years.

The foundation of these deficits was laid between 1939 and 2010, when numerous governors and legislatures failed to save adequately for pensions and other retirement benefits pledged to state employees and municipal school teachers.

The state’s required contributions to these line items remain some of the fastest-growing segments of the budget as Connecticut scrambles to catch up on past debts.

Rising Medicaid expenses, payments on bonded debt and compensation for state employees — who forfeited raises this fiscal year and last — also are key components of the projected deficit.

Connecticut does have $1.2 billion in its emergency reserves, commonly known as the rainy day fund.

But Lamont has been wary of tapping those reserves, saying Connecticut should retain them as a buffer against the next recession — which hasn’t arrived yet. 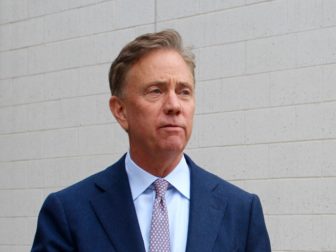 “I think it’s a bit of a cop-out to rely on the rainy day fund,” Lamont said Thursday. “This is not a rainy day, when it comes to the American economy or the Connecticut economy. … I think people have elected us to make some big changes going forward, so I don’t want to patch, patch, patch through the rainy day fund and other short-term fixes. I want a real fix.”

But Malloy notes in his transition budget that Connecticut is poised to keep building those reserves.

This fiscal year is on pace to finish with a $255 million reserve on June 30. The new state volatility cap captures excess income tax receipts tied to capital gains and other investment earnings, and this system is on pace to deposit another $650 million into the reserve in September.

If these two projections hold, the rainy day fund balance would climb from $1.2 billion to $2.1 billion — the largest in state history.

Lamont says he doesn’t want to touch those funds, but what about deposits in future years?

Analysts say investment-related income tax receipts also will continue to perform better than initially projected in the next two-year budget.

Connecticut could revise its volatility cap system in future years to slow or suspend the rate of future deposits without touching what’s in the reserve now.

The Malloy administration estimates this would give Lamont an extra $278 million starting in the first year of his new budget to mitigate the deficit.

“Governor Malloy is required by statute to prepare this tentative budget, and I appreciate the work that went into preparing it and all of the work his team has done to ensure a smooth transition,” Lamont wrote in a statement Thursday afternoon. “My team and I will review it as we prepare a new, balanced budget that prioritizes economic growth.”

The governor also told Lamont he could shave about $400 million off the annual deficits by maintaining a new taxing arrangement on Connecticut’s hospitals that was passed in 2017.

Technically this arrangement dramatically increased annual taxes on hospitals, but also state payments back to the industry. The complicated back-and-forth arrangement is employed by most states as a means to leverage federal aid, and Connecticut receives a big increase in Medicaid payments through this deal.

After absorbing considerable criticism in 2017 for taking nine months to adopt a new budget, legislators laced the plan with a slew of small tax cuts — but scheduled many to take effect after the election, when deficits many times the size of this promised relief must be solved.

Middle income households, college graduates, retirees and others stand to receive tax breaks worth $120 million in the first year, and $163 million in the second.

Malloy said Lamont could whittle down the deficit by suspending these tax breaks.

Another $138 million could be saved each year simply by capping municipal aid.

Certain grants are supposed to be increased annually based upon formulas set in state law — increases that are suspended year after year during tough times, rather than simply repealed entirely.

The Malloy administration warned capping may not be sufficient, though, and said that if local aid is cut, Connecticut’s poorest communities should be shielded.

Malloy challenged lawmakers in 2017 to order cities and towns to foot the bill for roughly one-third of the annual contribution to the pension fund for municipal teachers — an expense state government, to date, has borne by itself.

The governor has said Connecticut no longer can afford to single-handedly cover the fastest-growing expense in the state budget. The fund suffers from more than seven decades of inadequate contributions prior to 2010. And according to one study, the annual contribution could more than quintuple, topping $6.2 billion by 2032.

Lawmakers balked at that option as municipalities objected loudly.

The governor then scaled back his proposal, suggesting cities and towns cover only the “normal cost” — an actuarial term referring to the full amount that must be set aside annually to cover the future pensions of present-day teachers.

Most of the $1.39 billion contribution the state must make next fiscal year involves catching up on payments past legislatures and governors failed to make. Only about $140 million is the normal cost of saving for the future pensions for present-day teachers.

Malloy again recommends in his transition budget that communities pay into the state to cover this normal cost.