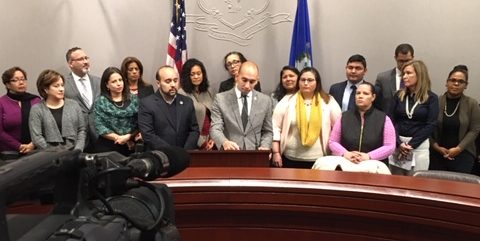 Across the nation there was a significant jump in Latino participation in the midterm election, and most likely in Connecticut, too.

Latinos have for years had the potential to become a powerful voting bloc. But their failure to turn up at the polls has historically hurt their political clout.

In this year’s midterms, however, they helped give Democrats key wins in Senate races in Nevada and Arizona. In  Texas, turnout rose dramatically in heavily Latino precincts and was also high in Latino areas of California, Florida and New York. There will be 43 Latino representatives in the next Congress — a record number.

In Connecticut, it’s much more difficult to pinpoint Latino voting participation. But an analysis by the Connecticut Mirror determined that cities and towns in the state where Latinos make up 25 percent or more of the population all experienced a significant increase in voter turnout.

And, in some of those towns — including Meriden, Ansonia, Stamford, Norwalk, Danbury, New Haven, New London, Windham and Waterbury — the growth in turnout exceeded the boost in voter turnout in the midterm election statewide.

The statewide turnout in the 2014 midterm was 55.6 percent and 65.2 percent in the latest midterm. In New Haven, for instance, turnout was 38.3 percent in 2014 and 58 percent in 2018. Nearly 30 percent of the city’s residents identified themselves as Hispanics or Latinos to the U.S. Census Bureau.

Many of the more than 540,000 Latinos in Connecticut live in the larger cities, which historically have lower turnout.

“People tend to be more transient in cities, and that leads to lower voting rates,” said Gabe Rosenberg, spokesman for the Connecticut Secretary of State’s office.

However, the gap between those larger cities and smaller, higher-turnout towns shrank in the midterm.

“Latinos saw there was a lot at stake, so they came out,” said Marie Bertrand, the incoming president of the Connecticut Hispanic Bar Association.

Nationally, a record 29 million Latinos were eligible to vote in this year’s election, according to the Pew Research Center. Preliminary data suggests there was a significant jump in Latino participation.

Speaking at a panel discussion in Los Angeles, Tom Perez, the first Latino Chair of the Democratic National Committee, was quoted as saying the turnout of first-time voters, including Latinos, was “a remarkable phenomenon.”

Since Latinos, in general, favor Democrats over Republican candidates, their increased participation in the midterm bolstered a “blue wave” that helped Democrats seize control of the U.S. House of Representatives and a number of other political offices, including the U.S. Senate seats in Arizona and Nevada and governorships across the country.

“Latino voters played a pivotal role in taking back the House,” Lujan told reporters during a conference call organized by the political action committee Latino Victory. “Evidence is clear: Early and active and robust outreach to communities of color — in this case, into the Hispanic community — clearly pays off.”

In Connecticut, it’s harder to decipher the impact of the more energized Latino electorate, but it may have boosted Democrat Ned Lamont’s bid for the governor’s office and helped Democrats boost their numbers in the general assembly.

“Latinos may have helped Lamont, especially in the cities,” Bertrand said. “Most likely they did.”

A coalition of Latino groups has emerged in Connecticut to capitalize on the increased political participation of the state’s Latinos, and ensure that they are represented in positions of influence and power. 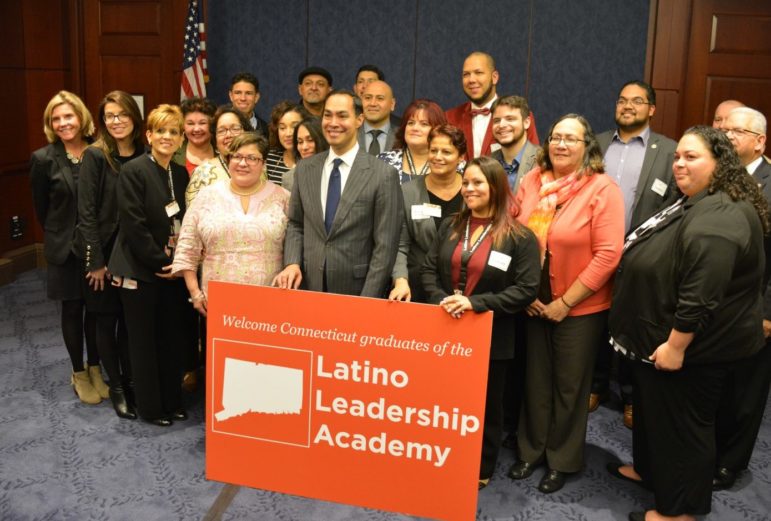 Graduates of the Hispanic Leadership Academy with HUD secretary Julian Castro, center, and members of the Connecticut Hispanic Democratic Caucus.

The newly formed CT Latino Task Force, a coalition of about 20 individuals and groups that includes the Connecticut Hispanic Bar Association, the Connecticut Chapter of the Hispanic Federation and NALEO, is collecting resumes from whom they say are qualified Latinos who want to work in the Lamont administration and is making sure they are reviewed by the governor-elect’s transition team.

“We want to really put a little pressure on the incoming administration to make sure that we can be adequately represented in government positions, but also on boards and commissions,” Beltran said. “We want to make sure that at the end of the day they can’t say ‘We did not receive any applications from qualified Latinos’.”

Rep. Chris Soto, D-New London, said the formation of the CT Latino Task Force is a first and an indication of maturing Latino politics in the state. He also said Connecticut’s Latinos may have come out to vote in greater numbers this year because they are opposed to President Donald Trump’s policies, but noted that wasn’t the only reason for turnout.

“People are starting to see the importance of being locally engaged,” he said.