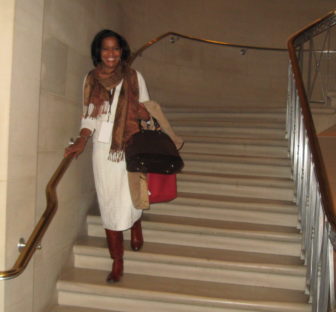 Freshman Rep. Johana Hayes is spending a few weeks getting to know Washington D.C. — and her new job.

Washington – Cloistered in a hotel a few blocks from the U.S. Capitol, Rep.-elect Jahana Hayes and dozens of incoming members of the next Congress are learning the ropes of their new jobs and getting to know the colleagues they will work with – and sometimes fight with—next year.

On Tuesday, Hayes grabbed a hurried lunch in the cafeteria of a U.S. House office building, sharing a table with Republican Rep.-elect Lance Gooden of Texas and a few other freshmen.

She chided Gooden for not sorting and recycling his lunchroom trash.

“We just dump it all in the same bin in Texas,” Gooden said.

Hayes retorted that in her home state of Connecticut people are more environmentally conscious.

Although she won’t be sworn in to represent the Connecticut’s 5th Congressional district until January, Hayes, 45, is spending a couple of weeks now meeting colleagues like Gooden and learning how to cast votes, hire staff, lease office space and find the closest restrooms to the House floor.

“We’ve also had a lot of workshops on ethics since we’ve been here,” Hayes said.

Congress has had its share of #MeToo scandals, but has been slow to approve legislation overhauling how it deals with sexual harassment.

It was an ethics issue that opened the door for Hayes’ election to Congress.  She decided to run after current Rep. Elizabeth Esty was condemned for the way she handled an abusive staffer, leading to her decision not to run for re-election.

Hayes said the most surprising thing she’s learned in her short time on Capitol Hill is “how deeply partisan it is.”

“Everything is framed in conversations about partisanship,”’ she said.

Yet Hayes, a former national Teacher of the Year who had a hardscrabble upbringing in Waterbury’s public housing projects, continues to be as optimistic as she was on the campaign trail.

“Anybody in America can find themselves represented in this class,” she said, referring to her freshman colleagues in the House.

The incoming freshman class is one of the largest since World War II, with 61 new Democrats and 31 new Republicans.

The GOP freshmen are overwhelmingly white and male. But the new Democrats are more  diverse. The freshman class includes several firsts for Congress — the first Muslim women, the first Native American women and the first African American women from several states. Hayes, for instance, is the first black woman representing Connecticut in Congress.

She said being a member of such a large class is also a little daunting.

“When there are a lot of new members, you have to make sure that you find your voice,” she said.

Not too far in any direction

For Democrats like Hayes, the tradition of freshman orientation was marred by a leadership fight. Some veteran Democratic lawmakers and a group of freshmen hoped for younger, more diverse leadership in the next Congress.

But Rep. Nancy Pelosi, D-Calif., currently the House Minority Leader, and her lieutenants, all in their 70s., refuse to let go of the reins.

Hayes said during the campaign that she would not vote for Pelosi as the next Speaker of the House. After arriving in Washington D.C., she had a long conversation with the Democratic leader.

“I asked her why she thinks she would be the most effective person,” Hayes said.

Pelosi listed her accomplishments. But Hayes did not make up her mind to support Pelosi until it was clear no other Democrat was going to offer an alternative.

“I waited for someone to come forward, but nobody did,” she said. “I was hoping we’d have more options.”

Hayes has, to date, hired only one staffer, her chief-of-staff. She will draw for her office space in a lottery on Friday.

Meanwhile, her colleagues in the Connecticut congressional delegation have offered her help in finding people who want to work in her office in Washington D.C. and in Connecticut. They’ve also offered her space in their offices to conduct job interviews and offered temporary loans of their own staff.

“Everyone said ‘whatever you need’….” Hayes said.

She has spent evenings attending receptions hosted by some of the dozens of informal caucuses established by members of Congress, but says she’s in no hurry to join any of them, including the Gun Violence Prevention Task Force co-chaired by Esty.

“I don’t want to go too far in any direction,” Hayes said.

However, representing Newtown in Congress and having stumped on gun control, Hayes said she’s committed to the issue.

“We are both passionate about a lot of things,” Hayes said.

The former history teacher also said she would like to work on primary and secondary education issues in Congress and is hoping for a seat on the House Education and Workforce Committee. Rep. Joe Courtney, D-2nd District, is a current member of that committee and it’s rare that two lawmakers from the same state are giving assignments to a panel.

But Hayes points out there have been exceptions to that practice.

She said she is also interested in serving on the House Agriculture Committee and the Small Business Committee.  “I would be happy with any assignment,” she said.

Hayes plans to continue to live with her husband Milford and their young son in Wolcott and commute to Washington D.C. when Congress is in session. She’s trying to find an affordable apartment in the city but is frustrated, she said, because “they are all so expensive and so small.”