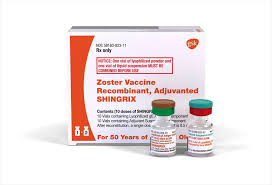 Shingrix, the recently approved vaccine for shingles, is hard to find these days.

A new vaccine to protect against a painful disease known as shingles is a victim of its own success and nearly impossible to find in Connecticut and many parts of the United States.

The vaccine, produced solely by GlaxoSmithKline and called Shingrix, became broadly available in the United States about a year ago.

A few months later, it was difficult to find doses of the vaccine in pharmacies or doctor’s offices.

That’s because federal health officials lowered the recommended vaccination age from 65 to 50 last year. A robust advertising campaign for the vaccine, a two-shot process that provides greater protection than an older, single-shot vaccine, also increased demand for Shingrix.

“There are more people asking for it. There is more awareness of the disease,” said Diana Levison, a pharmacist at Oxford Pharmacy in Connecticut.

The pharmacy, located in the town of the same name, has a small number of doses of the  vaccine. But those are reserved for customers who were able to get the first dose and need to follow up with another.

Anyone else who wants the vaccine is placed on a waiting list, a practice that’s been adopted by many pharmacies in Connecticut.

GlaxoSmithKline estimates about 115 million people ages 50 and older are eligible for the vaccine.

Shingles affects one in three adults, is usually identified by a blistering rash and can cause debilitating nerve pain that lasts for months. There are about 1 million cases of shingles each year in the United States, with the rise of the disease increasing with age.

The Centers for Disease Control and Prevention has an online vaccine locator. But it warned that “some locations are experiencing shingles vaccine shortages.”

“Remember to call ahead to ensure that the vaccine you need is available,” the CDC said.

None of the dozen or so pharmacies contacted by the CT Mirror Monday had any doses of the vaccine for new patients.

That included the CVS at 777 Main Street in Hartford.

“I don’t think (GlaxoSmithKline) thought it would be so popular,” said pharmacist Eric Hunt.

He also said he believed all CVS stores in the state were experiencing shortages.

Peter Przybylski, a pharmacist at Seybridge Pharmacy in Seymour, said his store had vaccines “intermittently” until the end the April, when it ran out.

It then received 20 doses in September. And none since.

“I have a waiting list of more than 40 people,” Przybylski said.

In a statement, GlaxoSmithKline, which is based in Great Britain, said it “has been met by unprecedented demand by health care providers and patients.”

“Providers are immunizing patients at a rate several times what was previously seen for shingles,” the drug company said.

GlaxoSmithKline said it has responded to sharply increased demand by accelerating the supply of Shingrix in the United States.

“We have been regularly shipping large volumes of vaccine every two to three weeks. Another large shipment was distributed this week…. in December, we  moved  move to a twice-monthly shipping schedule,” the company said.

Still, the vaccine takes six to nine months to produce and GlaxoSmithKline said it is expecting “ordering limits” to continue through 2019.