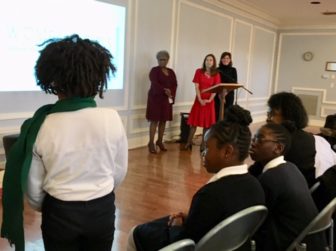 Gov.-elect Ned Lamont began accepting policy recommendations Monday from broad swaths of Connecticut voters and interest groups, an exercise that could shape and produce allies for his still-developing agenda, while also raising expectations for what Lamont is willing to tackle in his first 100 days as governor.

The first of 15 presentations came Monday as a “Women & Girls” transition policy committee challenged Lamont to appoint women to half of all open posts, raise the minimum wage to $15, create a paid family and medical leave program and update sexual assault laws. The last presentation is a briefing on agriculture and food issues at Geremia Greenhouse in Wallingford on Wednesday.

“Ned and I campaigned on a lot of the issues that you see,” Lt. Gov.-elect Susan Bysiewicz said after the first session. “Some of the other ones we really, really like. We like to set the bar high, because the higher the expectations, the harder you have to work to meet them. And that’s why we are also building support by doing this for these very issues.”

Bysiewicz represented the new administration at the Women & Girls presentation in Hartford at Grace Academy, which describes itself as a private, tuition-free middle school for “girls from underserved families.”

While Lamont and Bysiewicz already endorsed some of policies recommended by the Women & Girls group, a spokeswoman for the transition emphasized that the recommendations are for the consideration of the governor-elect: They are “informing his agenda, not setting it.”

Other groups delivered briefings Monday on health care at Griffin Hospital in Derby, on energy at Curtis Packaging in Newtown, on digital strategy at Naugatuck Valley Community College in Waterbury, and on human services at the Veteran’s Home and Hospital in Rocky Hill.

The template provided to the groups asked them to identify goals achievable in the first 100 days of an administration that takes office at noon on Jan. 9, as well as those that require legislative action. It asked the groups for examples of success from other jurisdictions that the administration should study and whether they found opportunities for cost savings.

Lamont was scheduled to attend the briefings on digital strategy Monday, on criminal justice Tuesday in Hartford, and jobs and the economy Wednesday in New Haven. Bysiewicz and transition committee co-chairs, including Attorney General George Jepsen and Rep. Toni Walker of New Haven, are accepting the other reports.

In Hartford, the Women’s & Girls group called on Lamont to construct a state government that reflects the population of Connecticut and to encourage private-sector opportunities for women by championing “Paradigm for Parity,” which has set a goal of “full gender parity by 2030.”

“On every issue that we talked about, if we look at the disparities in our state in terms of economics, you find that women and girls are falling behind,” said Khalilah L. Brown-Dean, a Quinnipiac University political scientist on the committee. “So, if we’re interested in growing our economy, keeping businesses in the state or attracting new business, you have to attract a workforce that can do that.”

A stronger economy requires the opportunity for participation by everyone, which means sensible policies on paid family and medical leave and better access to day care, the committee members said.

“Nothing we talked about today only benefits women and girls,” she said.

Maddie Granato, a committee member and policy manager at the Connecticut Women’s Education and Legal Fund, noted that Connecticut is surrounded by states that have adopted some type of family leave policies or are considering them.

The policies are a form of disability insurance. The version proposed during the past legislative session and expected to be submitted again next year would be funded by employees and administered by the state.

Bysiewicz took questions after the presentation. The last and bluntest query came from Norina Gakpey-Graham, a 7th grader at Grace Academy: Would she and Lamont be raising taxes?

The crowd laughed. Bysiewicz told her that was not the plan of the new administration, which is opposed to raising tax rates but is open to finding new revenue by broadening the base of goods and products subject to the sales tax.

The transition team released outlines of the recommendations made Monday. Final reports are expected to be posted on the transition website next month.

At Griffin Hospital Monday afternoon, physicians, insurance company presidents and representatives from health care providers and advocacy groups delivered 16 recommendations, most of which were inspired by Lamont’s position that he sees health care as a basic human right.

The group recommended ways for the state to improve data collection, adjust the insurance plans available on the state’s Affordable Care Act marketplace, and urged Lamont to commission a study to review the Connecticut Medicaid program. The study should assess its performance against national benchmarks and identify and recommend ways to improve access to healthcare, the committee said.

Its members acknowledged the complexity of developing policies that would improve access and lower costs.

“It’s a very difficult task,” said Dr. M. Saud Anwar, the mayor of South Windsor and the chair of the internal medicine department at Manchester Memorial and Rockville General Hospitals. “If someone could fix this, you’d get a Nobel prize.”

Martha Shanahan contributed to this story.