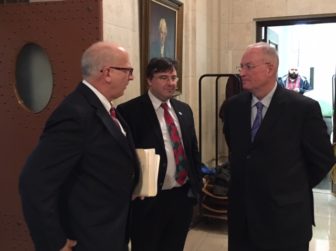 The Connecticut Supreme Court quickly concluded after oral arguments Friday that the validity of a state House election marred by a ballot mixup in Stratford must be resolved by the House of Representatives, not the courts.

The decision read from the bench by Chief Justice Richard A. Robinson after a brief recess allows state officials to certify the re-election victory of Rep. Philip Young, D-Stratford, and upholds a Superior Court judge’s refusal to order a new election.

Young defeated Republican Jim Feehan by 13 votes after a recount last month in the 120th House District, but Republicans say as many as 76 voters were handed wrong ballots at Bunnell High School, a polling place shared by two districts, the 120th and 122nd.

“Congratulations,” Feehan told Young as the two men shook hands outside the courtroom in Hartford, across the street from the State Capitol — where their fight for a legislative seat will continue after the new session opens on Jan. 9.

“It’s uncharted territory,” Feehan said. “I don’t know what they’re going to do.”

The territory is not really uncharted. 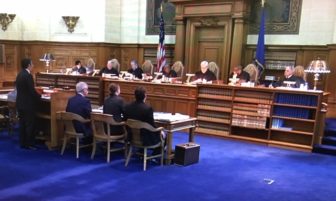 The court hearing arguments in the Stratford elections case.

After investigating allegations of irregularities involving absentee ballots in 1984, a special committee voted to seat Democrat Joan Hartley of Waterbury after she won a House seat by two votes. The panel was dominated by Republicans, who won control of the House that year.

Democrats won 92 of 151 House seats last month, but the Stratford review will be bipartisan as the rules have been changed since 1984. Under current House rules, the validity of a member’s election is a matter for a committee of two Democrats and two Republicans.

The House never has ordered a new election to resolve disputed results, and it was unclear how it would force one. Lawyers speculated the General Assembly could pass a special act requiring a new election. But the answer might be as simple as the House refusing to seat Young, creating a vacancy.

Young first won the seat in a special election in February, an upset in a district long represented by Republicans, mostly recently Laura Hoydick. She resigned after being elected mayor in 2017. State law spells out the process and timing for a governor to order a special election if there is a legislative vacancy.

Lawyers representing Young and state election officials told the court that the Connecticut Constitution was unambiguous: The state House and Senate have sole jurisdiction over resolving disputed elections of their members.

“There is a reason you have not been cited a single cases where a new election for a House or Senate seat was ordered” by a court, said William M. Bloss, representing Young.

Proloy K. Das, the lawyer representing Feehan, argued that the courts did have jurisdiction to protect the rights of the voters who were given the wrong ballots, calling them disenfranchised.

“Keep in mind, the rights of the voters are at issue here,” Das said.

The justices were dubious, peppering Das with questions about whether Das had standing to bring the case or if the rights of voters really were the issue.

“I’m not following that,” said Justice Gregory T. D’Auria. “Do you represent the voters?”

Justice Maria Araujo Kahn asked Das if he would be seeking a new election on behalf of the voters had his client won.

Das said someone would have brought a challenge, presumably the loser.

House Minority Leader Themis Klarides, R-Derby, who attended the hearing, said she would be speaking to House Speaker Joe Aresimowicz, D-Berlin, about convening a committee to review the results.

“Seventy-six people were disenfranchised,” she said. “If Democrats didn’t get 76 people to get the proper ballots, and 76 people did not get to vote and choose the person  in their district, they’d be setting the State Capitol on fire.”