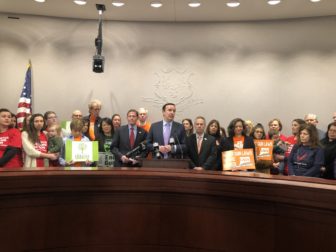 Sen. Chris Murphy speaks at a press conference on Monday about his background checks bill.

Connecticut’s Democratic senators plan to re-introduce a universal background check bill this week that was first proposed six years ago as a response to the massacre at Sandy Hook Elementary school.

Back then — to the dismay of family members of Sandy Hook victims who watched the vote from the Senate gallery — the background check bill failed to win enough votes, even though the chamber was controlled by Democrats at the time.

Republicans currently hold a 53-47 vote majority in the Senate. Most legislation in that chamber requires 60 votes to pass.

At a press conference in Hartford on Monday, Sen. Chris Murphy, D-Conn., was cautiously optimistic about the bill’s prospects.

“It is going to be difficult. We will likely have to find about a dozen Republicans who will vote with us but there are lots of Republicans who are on the ballot in 2020,” Murphy said.

“We have reached that tipping point when we are breaking the grip of the NRA and the special interests who have been in our way up to now on this issue,” Blumenthal said.

The senators’ bill would extend FBI background checks, which are now conducted when someone purchases a gun from a store, to people buying weapons at gun shows and off the internet.

Murphy said the bill “will make sure that every single person that tries to buy a gun in this country proves that they are not a dangerous criminal before they get their hands on a dangerous weapon.”

Sen. Chris Murphy displays a poster of Newtown shooting victim Dylan Hockley as he comes to the end of his filibuster on the Senate floor in 2015.

However, leaders in the new Democratic-controlled House have planned votes on more than a dozen gun-related bill, including the universal background check legislation.

“I think the stronger the bipartisan vote in the House of Representatives, the more pressure there will on Republicans in the Senate,” Murphy said.

Despite the obstacle GOP leadership in the Senate poses to Democrats who seek to tighten federal gun laws, Blumenthal said they are not settling for background checks alone. He also plans to introduce bills that would require safe storage of weapons and extend Connecticut’s “red flag” law to the rest of the nation. That bill would allow family members and others to seek the temporary confiscation of guns from people who could be a threat to themselves or others.

“Background checks are a beginning, they are a bare minimum,” Blumenthal said.

Blumenthal and other Democrats hope to win the war on messaging about the folly of replacing Ginsburg with a conservative.

Hayes in quarantine after staffer tests positive for COVID-19

Hayes said she is asymptomatic and 'awaiting an appointment to get tested.'

Democratic lawmakers, including Sen. Richard Blumenthal, are concerned that Durham's probe is being used to influence the election.