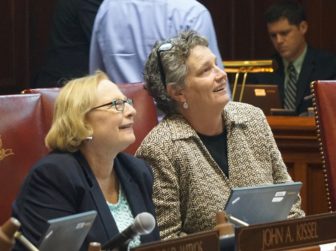 Sens. Terry Gerratana, left, and Beth Bye are among those leaving the Senate for the administration.

Senate Democrats scrambled Monday night to reshuffle committee co-chairmanships after it became clear to them that Larson and Gerratana would join Bye in the exodus to the executive branch that comes with new administrations.

Larson will become the executive director of the Office of Higher Education, Gerratana will be an adviser in Office of Health Strategy, and Albis will be a senior adviser to the commissioner of energy and environmental protection, administration and legislative sources said. It was previously announced that Bye would lead the Office of Early Childhood Education and Soto would become the administration’s director of legislative affairs.

“Tim is a natural relationship builder and someone who can connect the dots between our state’s independent colleges and universities and postsecondary career schools and the business community in which we want graduates to find gainful employment,” Lamont said. “I’m looking to him to help create a pipeline between these institutions and the industries that are looking for qualified, local applicants.”

Larson, a former East Hartford mayor and the brother of U.S. Rep. John B. Larson, is currently the executive director of Tweed New Haven Airport.

The nominations of Larson and Bye are subject to legislative confirmation.

The terms of Lamont, lawmakers and other state officials elected in November begin Wednesday, also the opening day of the 2019 General Assembly session.

“These leaders represent several agencies that interface with the public in a number of critical areas, and I appreciate their continued leadership as we begin my administration,” Lamont said in a statement. “In renominating these individuals, I have asked them to come to the table prepared to share new ways of approaching old and emerging problems as we make Connecticut state government more user friendly, accessible and digitally focused. I look forward to working with them on these important priorities.”

Talent searches continue for other agency heads, but some incumbent commissioners still are in the mix and will be evaluated against other candidates. In a few cases, commissioners have been informed that Lamont wants fresh leadership.Those agencies include the Department of Economic and Community Development and the Department of Motor Vehicles.

Democrats won majorities of 23-13 in the Senate and 92-59 in the House, though one House race still is being contested. Bye, Gerratana and Larson all hold safe or relatively Democratic seats.

While the House majority is only losing two members, there likely will be a ripple effect as some House members consider running for the soon-to-be-vacant Senate seats.