House GOP vows to be a check on Democrats’ spending 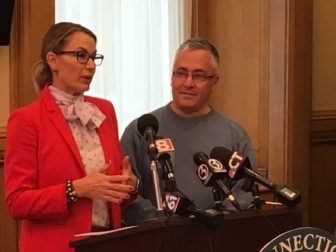 Minority Leader Themis Klarides of Derby and Deputy Minority Leader Vincent J. Candelora of North Branford also said the House GOP would push for stronger deterrents to youth vaping and to redirect some resources from an underutilized New Britain-to-Hartford busway into highway, bridge and rail upgrades.

“Revenue grabs — whether it is higher tax rates, tolls, sports gambling or (legalization and taxation of) recreational marijuana — will not solve our underlying financial problems,” Klarides told reporters during an afternoon briefing in her Capitol caucus room. “Implementing those revenue initiatives outside of the overall budget debate will not work, and we would not support them in that context because there are significant rippling social and fiscal consequences associated with each.”

A longtime advocate for spending reforms, Klarides has voiced her concern frequently since November — when Democrats expanded their lead in the House and regained control of the Senate — that the majority is gearing up to spend recklessly.

“All we have heard from our colleagues on the other side of the aisle has been more, bigger, and let’s expand,” Klarides said.

At first glance, the state’s fiscal picture has improved over the past 12 months.

Income tax receipts — primarily those tied to capital gains and other investment earnings — have pushed the budget reserve from about $212 million to $1.2 billion, with the potential to reach $2.1 billion by this summer.

But economists attribute much of those gains to temporary factors.

And a federal income tax loophole that for years allowed hedge-fund managers to accumulate offshore gains without paying federal and and state income taxes vanished in 2018, leading to another one-time surge in income tax payments.

And fiscal analysts say the pressure on state finances is only beginning as the overall cost of pension and other retirement benefit programs — which were badly underfunded between 1939 and 2010 — continues to surge through the early-to-mid 2030s.

“We are facing a multi-billion-dollar deficit,” Klarides said. “Yet all we want to do is expand what we are doing now? We need to take a long hard look at what we’ve been doing.”

But can Connecticut suspend debate on all of these revenue issues until it solves an enormous problem amassed across seven decades?

“I am always reluctant to get into theoretical political debates,” House Speaker Joe Aresimowicz, D-Berlin, responded afterward. “While the minority leader seems comfortable doing it at this time, I still hope for all of us to be sitting around the table to have an open, honest discussion about the issues facing the state.”

House Republicans are committed to maintaining new caps on spending and borrowing and other fiscal controls designed to force the state to save more, Candelora said. These were passed with bipartisan support in late 2017.

“We have to downsize this government,” Klarides said. “We have to make structural changes. We have to fix what’s wrong with this state, and that means making difficult decisions.”

One of those decisions, she said, should involve scaling back CTfastrak, the bus transit program linking New Britain and Hartford. Any bus runs not operating sufficiently close to capacity should be suspended and the funds redirected to transportation infrastructure work. Klarides said. House GOP leaders did not say how much funding they expected to shift by curtailing bus service, but acknowledged it would not be a major source of funding for the transportation infrastructure rebuilding program.

Still, this efficiency and any other should be identified before legislators have any debate about installing electronic tolling on Connecticut highways, they added.

Klarides and Candelora said their caucus also is wary of an anticipated debate on legalizing and taxing recreational marijuana use.

House GOP leaders also said imposing new fees on sports betting could be studied, but also should not be rushed into quickly.

The state could use this as an opportunity, Klarides said, to revisit the 26-year-old agreement it has had with tribal casinos in southeastern Connecticut. The state provides the tribes with exclusive authority to offer casino gambling in exchange for 25 percent of receipts from video slots at these gaming centers.

The Mashantucket Pequot and Mohegan tribes contend that sports betting is a casino game. Klarides and Candelora, and others in the legislature, have said they are not certain this is true.