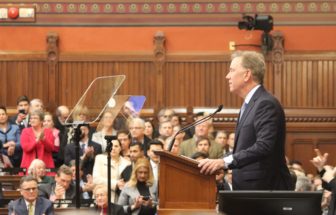 Gov. Lamont during his State of the State Speech

But while lawmakers praised the new governor’s dynamic style, special interest groups were a little less certain how well Lamont’s agenda would mesh with their respective goals.

There were “an awful lot of positive things to build on,” Connecticut Business and Industry Association President Joseph F. Brennan said after the governor’s State of the State Address.

Brennan praised Lamont for his “laser focus” on job creation, job training and education, and his recognition that greater economic growth is a key to solving state government’s ongoing fiscal crisis.

“He made very god points in terms of how to turn the state around,” said Salvatore Luciano, president of the Connecticut AFL-CIO.

But one of Lamont’s “points” for solving the budget crisis involved an appeal for sacrifice.

“Please don’t tell me you’ve done your share and it’s somebody else’s turn. It’s all of our turns,” the governor said, echoing comments union leaders have made over the past year to rebuff calls for another round of labor concessions. [State employees granted givebacks in 2009, 2011 and 2017.]

But Luciano said the governor’s message applies equally to corporations, wealthy households and other groups that unions have said should be paying higher state tax rates.

“I thought it was (an appeal to) everybody,” Aresimowicz said. “I think it was more encompassing than one might think. … It was the burden on us to all be part of the solution.”

Lamont also shook up municipal advocates when he warned communities that shared services and regionalization must become more common.

“I was pleased to hear that,” sand Senate President Pro Tem Martin M. Looney, D-New Haven. “It is good policy, yes, but it is going to become increasingly financially necessary. In order to afford to give aid to the towns and make sure it goes as far as possible in an efficient way, we can’t continue operating the way we always have.”

But municipal advocates said Lamont and the new legislature would have to deviate sharply from past efforts in this area to achieve any real savings.

“We’ve got to avoid these top-down, forced-consolidation efforts that never seem to make sense,” said Betsy Gara, executive director of the Connecticut Council of Small Towns.

Previous legislators and governors too often have relied on poorly researched consolidation proposals, with exaggerated cost-savings estimates, as an excuse to reduce municipal aid, advocates said.

“The state has done such a poor job with data collection,” said Joe DeLong, executive director of the Connecticut Conference of Municipalities. “Let’s work with real numbers, not opinions.”

DeLong and Gara said Lamont needs to be ready to remove real impediments to regionalization. Advocates have proposed modifying collective bargaining rules that allow communities to establish shared public services with employees that are exempt from collective bargaining.

DeLong added that state officials too frequently have been reluctant to look at consolidating school and public safety services — which consume the overwhelming bulk of municipal budgets. 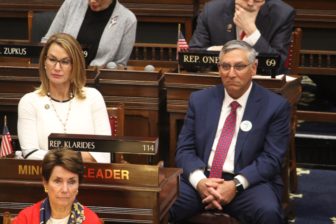 No significant savings can be achieved without change in these areas, he said, adding that otherwise “you’re just nibbling around the margins.”

I think we’ve got to hear what he has to say,” Senate Minority Leader Len Fasano, R-North Haven, said. “We’ve got to get to know each other. I think this governor has shown a togetherness I haven’t seen in this place in a while.”

House Minority Leader Themis Klarides, R-Derby, observed that after Gov. Dannel P. Malloy’s first address eight years ago, “we all had hope, too. And I don’t say that in a cynical way, but I say it in a realistic way that we have to make sure we give everybody a chance. I take people at their word until I don’t.”