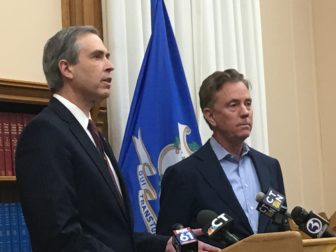 Gov. Ned Lamont and the president of Webster Bank announced a new partnership Tuesday to provide interest-free loans to essential federal workers who are unable to receive unemployment assistance during the government shutdown, now entering its 25th day.

The program, which is being supported by the Connecticut Bankers Association, calls for Webster — and potentially other banks — to provide the loans. The state would guarantee the lending in event some recipients fail to repay.

“Federal workers – regardless of their employment classification – are hurting while the federal government is shut down,” Lamont said. “This is particularly true for those employees who must still report to work and incur the cost of commuting and other work-related costs without receiving a paycheck.”

The governor estimated 1,200 to 1,500 federal workers in Connecticut could fall into this category, including air traffic controllers and certain Environmental Protection Agency staff.

To qualify for unemployment, a federal employee has to be one of those furloughed as part of the ongoing shutdown, and not one of the more than 400,000 workers nationally asked to remain on the job without pay.

Lamont said he doesn’t want federal workers, particularly those in crucial jobs tied to air traffic safety and environmental protection, to leave to find other work over what amounts to a technicality in unemployment rules.

“Webster Bank is pleased to work with the state to provide assistance to essential workers during this time of hardship,” John R. Ciulla, President and Chief of Executive Officer of Webster Bank, said. “Webster has a long history of supporting Connecticut and will work alongside other banks to assist residents during this difficult period.”

Full details and terms of the loans still are being developed, Ciulla said. But, he added, the loans will be provided interest-free.

Ciulla also said that he anticipates other banks agree to participate in this relief program as it is developed.

One key detail that still hasn’t been resolved is whether Lamont can act unilaterally to provide the loan guarantees — such as through an executive order — or whether it will require legislative action.

The new governor, who was sworn in on Jan. 9, told one reporter he wasn’t sure of the process, but that he would reach out to legislative leaders on Wednesday and was confident the matter could be resolved.

“I know people are having trouble with simple cash flow – they need to buy food, to put gas in their car, to heat their home. And they’re running out of money,” said Sen. Cathy Osten, D-Sprague, co-chair of the Appropriations Committee.

Osten and several other Democratic senators sponsored a bill Tuesday that would allow the Department of Labor to assist federal employees who are either furloughed or forced to work without pay to be paid through the state’s unemployment compensation fund. The fund would then be reimbursed by the employee once the federal government shutdown ends and federal employees are paid their back wages.

“A lot of federal employees who are not being paid are public safety workers, putting their lives on the line in prisons or at airport security,” Osten added. “These are the jobs that protect us day in and day out, and they shouldn’t be treated with disrespect. I want to thank Governor Lamont for his consideration of these hardworking people.”

“I appreciate Governor Lamont’s efforts to create a public private partnership between government and business leaders to quickly solve a problem impacting state residents,” Senate Minority Leader Len Fasano, R-North Haven. “All our hearts go out to the federal employees who are struggling to support their families at this time. The proposed temporary support is a clever and unique way to leverage a partnership to help those in need. I look forward to reviewing the details of this proposal and am hopeful that we will see necessary protections to ensure taxpayer funds are protected at the same time assistance is provided to the workers who are most in need.”