Hayes joins hunt for McConnell in attempt to end shutdown

But no end appears to agency closures 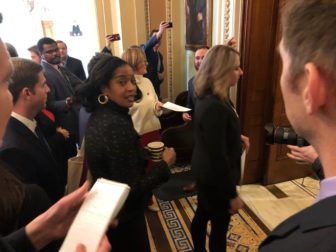 Rep. Jahana Hayes, along with other freshmen Democrats in the House, went looking for Mitch McConnell Wednesday.

Washington – Followed by a phalanx of journalists, Rep. Jahana Hayes joined a group of House Democratic freshmen Wednesday who went on the hunt for Senate Majority Leader Mitch McConnell.

Why did the new House Democrats go searching for McConnell, first in his state office in the Russell Senate Office Building, then in the Senate cloakroom, and finally on the largely deserted Senate floor?

The group, which included firebrand Rep. Alexandria Ocasio-Cortez, D-N.Y., wanted to give McConnell a letter signed by 30 freshmen urging him to allow votes in the Senate on House Democratic legislation to reopen the government.

But McConnell is holding fast to his promise to only hold votes on bills President Donald  Trump will sign. As the partial government shutdown stretched into its 26th day, there was no sign of a way to end the partisan stalemate over Trump’s demand for $5 billion to build a wall along the U.S.-Mexico border.

Trump invited some moderate Democrats to lunch at the White House on Wednesday, but failed to convince any of them to consider funding his wall before the government is reopened.

Meanwhile, most congressional business, especially in the Senate, has been slowed.

With no quick end to the shutdown in sight, the Trump administration continues to try to blunt the impact of the shutdown by ordering thousands of furloughed workers, without pay, back to work at their shuttered agencies.

The Food and Drug Administration, for instance, announced Tuesday that it would restart food-safety inspections at facilities that handle riskier products like fresh-cut produce. The FDA has been closed since Dec. 22 because it receives its funding from the Department of Agriculture’s budget which, like the budgets of eight other major federal agencies, has not been approved.

DeLauro, head of the Congressional Food Safety Caucus, said food inspections are a “staff-intensive task” that must be carried out broadly and often.

“The FDA has announced plans to bring back employees,” DeLauro said. “But they will be working with only one-third of the regular inspectors and they will also work without pay.”

DeLauro also said that if “there’s an outbreak of some sort,” states will have “no capacity to deal with it.”

“Protecting our nation’s food supply is paramount,” she said.

The Trump administration has also sent Internal Revenue Service employees who had been furloughed back to work to process tax refunds and income verification requests from mortgage lenders.

The U.S. Department of Agriculture also announced it will call back to work about 2,500 employees to reopen about half of the Farm Service Agency offices around the country that help farmers in a number of ways, including the processing of farm loans.

While there is no movement toward an agreement that would reopen the government, some Senate Republicans are feeling pressure to distance themselves from Trump as polls show a majority of Americans blame the president and GOP lawmakers for the shutdown.

Meanwhile House Speaker Nancy Pelosi, D-Calif., on Wednesday asked Trump to postpone his State of the Union address — or deliver it in writing — citing security concerns related to the partial federal government shutdown.

The State of the Union address is scheduled for Jan. 29.