CT’s tax receipts rebound faster than those in most states 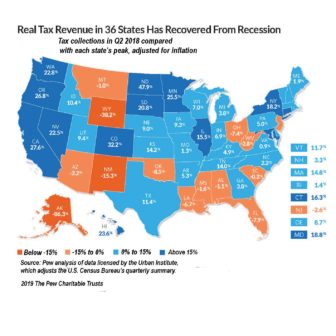 Connecticut is one of just 13 states enjoying robust growth in tax revenues since the last recession, according to the Pew Charitable Trusts.

Connecticut’s recovery from The Great Recession generally is viewed as lagging the nation’s, particularly when it comes to job growth.

But a new analysis from the Pew Charitable Trusts shows Connecticut among the leaders in one key metric — state tax revenue growth.

And while a significant portion of Connecticut’s revenue recovery is attributable to major tax hikes in 2011 and 2015, critics had argued — inaccurately — that those increases resulted in less resources in the state’s coffers.

“State tax revenue—like the U.S. economy—has grown slowly and unevenly since the recession,” Pew analysts wrote, adding that the revenue recovery, in general, was weaker this time than it had been during the previous three national recoveries. “Over the past 10 years, the number of states that have regained their tax revenue levels has risen and fallen, reflecting volatility in state tax collections as well as tax policy changes.”

By mid-2018, state tax collections — after adjustments for inflation — were 12.2 percent higher, on average, than the peak level they recorded in the 2007-08 fiscal year.

This left 36 states with tax collections that exceeded their pre-recession peak. And 13 states, including Connecticut, were at least 15 percent higher than this key benchmark. Connecticut, which ranks 12th highest in terms of revenue growth, was 16.3 percent above its pre-recession mark after adjustments for inflation.

Conversely, collections were down in 14 states with three states still more than 15 percent below their pre-recession highs.

There also hasn’t been a uniform approach to tax policy, nor a common trend in revenue growth results.

For example, while Ohio and North Carolina both largely cut taxes after the recession, Ohio’s receipts were down 7.4 percent by mid-2018 from the pre-recessional peak, while North Carolina’s was up 2.2 percent.

According to the National Association of State Budget Officers, states enacted $10 billion in net tax increases in 2018, following $1.8 billion in hikes over the previous two years.

Joe Brennan, president of the Connecticut Business and Industry Association

Connecticut ordered its tax increases soon after the recession. Lawmakers and Gov. Dannel P. Malloy approved more than $1.8 billion in 2011 and close to $900 million in 2015.

Many critics argued these tax hikes weakened Connecticut’s economy so severely that tax receipts actually were in decline. This is not true.

Just before the last recession, in the 2007-08 fiscal year, all General Fund taxes collectively raised $12.5 billion. By comparison, taxes raised $17.1 billion in 2018. Even after the 2008 total is adjusted for inflation, it represents $14.4 billion in 2018 dollars, according to the U.S. Bureau of Labor Statistics’ inflation calculator.

But Joe Brennan, president of the Connecticut Business and Industry Association, warned the state’s revenue growth must be assessed cautiously.

While state tax revenues have rebounded, most of the growth occurred over the past two years.

And both Brennan and Pew analysts warn 2017 and 2018 tax receipts were influenced heavily by one-time factors.

Many households inflated their quarterly state income tax payments in December 2017 to take advantage of favorable federal income tax rules that expired after the 2017 calendar year.

And a federal income tax loophole that for years allowed hedge-fund managers to accumulate offshore gains without paying federal and and state income taxes closed one year ago, leading to a one-time surge in payments in 2018.

“We have to look are what’s driving that revenue growth,” Brennan said, adding that while state income tax receipts from paycheck withholding have improved, Connecticut needs to do more to encourage more companies to expand and grow jobs.

“Are we in better shape than we were? Yes,” Brennan said. “Are we anywhere near close to where we need to be? No.”