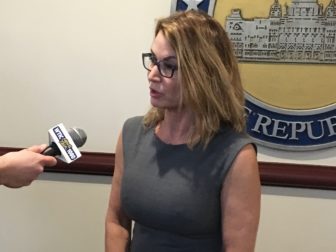 The top Republican in the House of Representatives took aim Tuesday at proposals to regionalize school districts and expand the sales tax.

Democrats regained control of the Senate and expanded their advantage in the House of Representatives by making big gains in last November’s elections.

“Nobody wants to give up their individual power in their towns and I get that,” Klarides told reporters during a late afternoon press conference in the Legislative Office Building. “I believe regionalization, where it naturally fits, is a wonderful thing to do in this state.”

For example, Klarides said, she represents a portion of the Amity Regional School District, which serves students from Bethany, Orange and Woodbridge. These communities also share social services, chambers of commerce and civic groups.

But Klarides said proposals raised by Democratic lawmakers would force consolidations in a “very haphazard way.”

One bill introduced by Senate President Pro Tem Martin M. Looney, D-New Haven, would require communities with populations of less than 40,000 to consolidate with another school district.

A second measure, offered by Senate Majority Leader Bob Duff, D-Norwalk, and Sen. Cathy Osten, D-Sprague, would direct any district with fewer than 2,000 students to merge with at least one more so that the expanded district’s student population exceeds 2,000. If a community did not wish to do so, it would have to explain its hardship in writing to the state Department of Education.

The Senate Democratic Caucus did not comment immediately after Klarides issued her statements.

But Looney put legislators and others on notice when the 2019 session convened on Jan. 9 that a more aggressive approach to consolidation would have to be considered.

Surging state pension and other debt costs have weakened state aid for schools in recent years and are projected to place increasing pressure on state finances at least into the early 2030s.

Nonpartisan fiscal analysts already have warned about major projected deficits for the next two-year state budget.

Finances, unless adjusted, are on pace to run $1.5 billion in the red in the 2019-20 fiscal year. And the potential deficit reaches $2 billion the year after that.

Lamont, whose first biennial budget proposal is due to legislators on Feb. 20, has asked his budget staff to research ending several longstanding sales tax exemptions — including those on groceries and medications — and mitigating this somewhat by reducing the overall 6.35 percent sales tax rate.

Klarides said her office has received numerous phone calls and emails from constituents since this first was reported on Monday.

“That is the one thing that has made the biggest splash, I think, in the state of Connecticut, and I’m sure my colleagues have been getting the same phone calls.”

Klarides said taxing groceries is a “nonstarter” for her caucus.

“These things are hurting middle class families and hurting businesses big and small,” Klarides added. “The only proposals we have seen thus far this year are proposals that are trying to bring more revenue into the state.”

The governor’s office did not comment immediately after Klarides’ press conference.

But besides trying to close the deficit, Lamont also has said he wants to freeze state income tax rates and deliver property tax relief to lower- and middle-income families by expanding the property tax credit within the income tax system.

Klarides also objected to a bill introduced by Looney that would add one-half of 1 percentage point to the 6.35 percent sales tax rate, and dedicate the additional revenue to cities and towns.