CT pot legalization could include expungement of criminal records 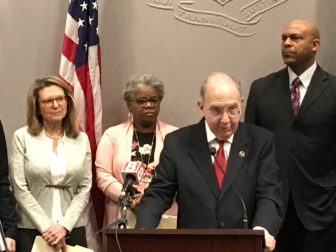 Senate Democrats unveiled a slew of proposals Wednesday that would not only legalize and tax the sale of marijuana for recreational use, but also expunge certain criminal records involving marijuana-related offenses.

The marijuana legislation is part of a larger caucus agenda that also includes: fees on sports betting, new labor rules banning “captive audience” meetings and on-shift scheduling, measures to help college students graduate debt-free, and the creation of a statewide authority that could be empowered to establish tolls.

“We have an opportunity here to correct a wrong,” said Sen. Doug McCrory, D-Hartford, referring to the marijuana legalization. “We need to correct something that has destroyed … families, neighborhoods and communities for years.”

Senate President Pro Tem Martin M. Looney, D-New Haven, said Connecticut and many other states have adopted the failed approach the country took in the 1920s during the prohibition of alcohol.

Looney estimated Connecticut could raise $70 million next fiscal year and as much as $150 million annually after that by taxing the sale of marijuana for recreational use. And a portion of those funds, though he didn’t say how much, could be used to help people who struggle with addiction.

“There’s a difference between someone moving 4 to 5 kilos versus a dime bag,” he said, using jargon for a small bag priced at $10. “If expungement is not part of the conversation,”  McCrory added, “I won’t support it.”

McCrory added that the criminalization of marijuana has been enforced with racial bias, as convictions for recreational use are far more common among minorities in urban centers than among whites in college and suburban settings.

Deputy House Minority Leader Vincent J. Candelora, R-North Branford, an opponent of the legalization of marijuana, countered afterward that Connecticut has “a very bad track record” when it comes to sin taxes. It is quick to collect the revenue, and slow to reserve any of the receipts to help those in need.

For example, Connecticut is tied with New York for the highest state cigarette tax rate at $4.35 per pack. [The District of Columbia levies a $4.50 per pack tax.]

But the federal Centers for Disease Control and Prevention (CDC) — which recommends funding levels for tobacco cessation efforts — ranked Connecticut dead last in 2017.

“I don’t have any confidence that we are going to properly fund drug addiction (cessation),” Candelora said. “We are commercializing marijuana for taxation. And what is ultimately going to happen is it’s going to still be unaffordable for people who want to use it and you are going to continue to see a black market grow in this state.”

The marijuana proposal was just one component of a larger agenda from the Senate Democratic Caucus.

“There’s never one or two things … that brings people to the state of Connecticut,” Duff said.

The caucus is also supporting business tax credits for companies that help college students pay down their higher education debt. Sen. Will Haskell, D-Westport, said another bill under development would create a trust, hopefully fueled by public and private dollars, to help all community college students graduate with zero debt.

To leverage private-sector participation in debt-reduction efforts, Haskell said the state could require students that benefit to commit to work in Connecticut for a set number of years after graduation.

Haskell said he believes these proposals mesh well with Gov. Ned Lamont’s “forward-looking vision that does desperately want to invest in the next generation of Connecticut workers.”

Sen. Julie Kushner, D-Danbury, said the caucus again would support a measure outlawing “captive audience” meetings. This means employers would be barred from compelling workers to attend informational meetings on why it would be problematic for their workforce to unionize.

A second labor measure would take aim at on-call shift scheduling in businesses with 25 employees or more. This involves instances when a worker is informed he or she might be needed to report to work in the near future, and is to remain available or “on-call.”

Those companies with more than 25 workers would have to give staff at least 72 hours notice, according to Sen. Marilyn Moore, D-Bridgeport. And workers would be entitled to no less than half the regular rate of pay if they are asked to remain on call, but not actually required to report to work.

Other components of the Senate Democratic agenda include: