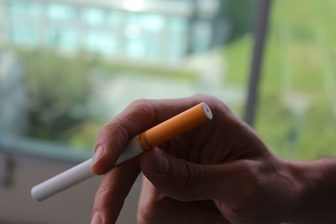 Connecticut lawmakers are sounding the alarm on teen vaping and tobacco use with a wave of legislation that would impose further restrictions on the products and attempt to curb youth access as states across the country are taking up similar measures.

Bills introduced from both sides of the aisle or with bipartisan support include raising the minimum age for buying electronic cigarettes and tobacco products from 18 to 21, banning flavored vapor products, and taxing vapor delivery systems and related goods.

Public Health Committee co-chair Rep. Jonathan Steinberg, D-Westport, said lawmakers on the panel will primarily try to move legislation focused on raising the age of consumption of both tobacco and vaping products.

“But that’s only the beginning, there are any number of other bills that deal with flavoring and access, helping schools deal with the crisis, very interesting sort of portfolio of different things we could look at,” Steinberg said.

The magnitude of the state’s teen vaping problem became evident this week when the Board of Education released a report showing that there has been a six-fold increase in the number of suspensions and expulsions related to vaping in Connecticut schools, from 349 disciplinary actions taken in the 2015-16 school year to 2,160 last year. The problem is so significant, state officials said, the state Department of Education has asked the state departments of public health and mental health and addiction services to help educators respond.

Lawmakers share these concerns, and are pushing for regulations that would tackle tobacco and vaping products from multiple angles.

Those measures include increasing fines and penalties for the illegal sale of tobacco and e-cigarette products to underage people, banning smoking and vaping on beaches, and prohibiting flavored vapor product advertisements and marketing to minors.

“Vaping companies are using flavors to seem kid-friendly,” Sen. Mary Abrams, D-Meriden, co-chairwoman of the Public Health Committee, said Thursday. “There is nothing friendly about nicotine.” 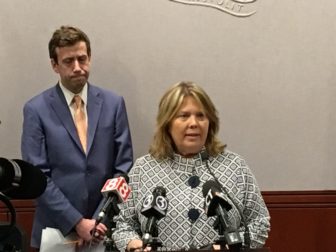 Abrams said she hopes Connecticut adults who used flavored e-cigarettes would support removing them from the market as a means to stop children from becoming addicted.

“We must stop today’s youth from becoming tomorrow’s customers,” she said.

State Rep. William Petit, who serves as a ranking member on the Public Health Committee, said vaping represents a major public health issue that lawmakers have to tackle.

“I assume that everybody, like me, is hearing about it in their localities from teachers, principals, superintendents, and junior high schools and high schools,” Petit said.

The push in Connecticut to keep battery-powered e-cigarettes out of the hands of young people comes as U.S. health officials are calling the issue an “epidemic.” Federally funded research shows vaping has surged among teens.

In November, the Food and Drug Administration said it will move to ban menthol cigarettes and flavored cigars, and tighten rules regarding the sale of flavored versions of vaping products.

A federally funded study conducted by researchers from the University of Michigan and University of Minnesota found increases in teen vaping among high school seniors went up 10 percent in the past year. The study found that 21 percent of 12th-graders reported vaping nicotine in the past 30 days — the largest one-year increase for any substance ever recorded by the 44-year study.

Overall, there were at least 1.3 million additional nicotine vapers among students in grades 9 through 12 in 2018 compared to last year, the study found.

Vaughan Rees, the director of Harvard’s Center for Global Tobacco Control, said the results show an increase in both youth interest and experimentation, which have fueled concerns from parents and those in the public health community. But those results do not reflect daily use among adolescents, Rees cautioned.

Rees said there needs be a balancing act in restricting access because vapor products offer an opportunity to reduce the health harms of combustible cigarettes and help mitigate the overall smoking epidemic. He said municipalities that have raised the age for the sale of tobacco products have seen declines in adolescent use.

“One hesitation is by making less harmful products more difficult to access it may encourage youth who are vaping to use cigarettes instead, so whatever they do with vaping they need to do it in tandem with cigarettes,” Rees said.

Karmen Hanson of the National Conference of State Legislatures said in addition to raising the age for use of tobacco products, states are also proposing bills to add e-cigarettes to clean indoor air rules, include vapor products in the definition of tobacco, impose taxes on e-cigarettes at the wholesale or retail level, and create educational campaigns on vaping for adults and students.

Opinion The TCI is not the right way to reduce emissions