While suspensions and expulsions in Connecticut schools are on the decline, the incidence of such disciplinary action in connection with vaping is increasing dramatically, according to a report released Wednesday by the state Department of Education.

“The one stand-out piece from this year’s report is the six-fold increase”  in vaping sanctions, the state Department of Education’s chief performance officer, Ajit Gopalakrishnan, told the State Board of Education at a meeting Wednesday.

“We are connecting them to our districts and they are actually going out and doing training,” Russell-Tucker said. “We recognize that this is a concern and the districts are concerned about it.”

Tarini Krishna, one of the non-voting student members of the board, said she had noticed that “schools seem a little lost in how to address the problem.”

“I would urge schools to involve students,” Krishna said. Often, she said teachers don’t know what a Juul  — a type of e-cigarette — looks like and may think a student is using a flash drive on their computer when they are actually charging a Juul.

“They are charging them in class (and teachers) don’t even know,” Krishna said.

John Frassinelli, chief of the state education agency’s Bureau of Health, Nutrition, Family Services and Adult Education, said he’s been hearing from districts that are starting to gather resources on the topic and conferring with state health officials about providing opportunities for talks with parents and students. 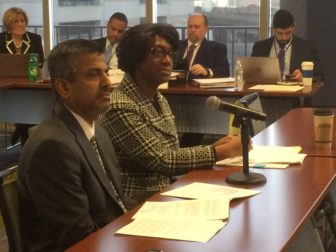 The State Department of Education’s Ajit Gopalakrishnan and Charlene Russell-Tucker present the state’s report on suspensions and expulsion Wednesday.

The report also showed that black and Hispanic students continue to be suspended more frequently than their white peers.

The report also showed that for the same offenses, black and Hispanic students receive a severe sanction at a slightly greater rate than white students. For example, for students involved in one incident of fighting or physical aggression last year, about 74 percent of black and Hispanic students received an out-of-school suspension or expulsion compared to 70.1 percent of white students.

The number of sanctions connected to violence against persons went down 16.1 percent over the five years from 2013-14 to 2017-18, while discipline connected to physical and verbal confrontation increased 17.4 percent and incidents connected to fighting and battery went up 14.9 percent.

The number of cases stemming from school policy violations decreased by 32.8 percent and those connected to theft went down 29.7 percent.

Gopalakrishnan said he’s unsure why arrests are increasing, but it may be because the  education agency is collaborating with the judicial department to “help our districts report this more accurately to us.”

Gopalakrishnan noted that in 2015 the state passed a law prohibiting suspensions of students in pre-kindergarten through grade two unless the incident is violent, endangers others, or is of a sexual nature.