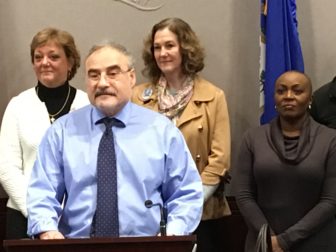 But Luciano also said Lamont may propose a cost-savings tied to “win-win” efficiencies involving benefit purchases and delivery of services — a collaboration labor would welcome.

Luciano made his remarks Monday as public- and private-sector labor leaders released a 2019 legislative agenda that called for a more progressive tax system and an end to “austerity budgeting” that has dominated state finances in recent years.

Lamont, who took office on Jan. 9, has not opened formal contract negotiations with the State Employees Bargaining Agent Coalition. And while there have been informal conversations, Luciano said they’ve involved “win-win situations.”

Could Lamont escalate that to a request for a wage freeze, higher health care costs for workers, or reductions to pension benefits? Unions approved concessions along those lines in 2009, 2011 and in 2017.

“I don’t think he will,” Luciano said during a late morning press conference in the Legislative Office Building.

The Lamont administration did not comment immediately after the AFL-CIO press conference.

The new governor, whose first two-year budget proposal is due to lawmakers on Feb. 20, is trying to avert significant potential deficits. Based on projections from nonpartisan analysts, and a revised revenue forecast issued Jan. 15, state finances — unless adjusted — are on pace to run $1.5 billion in deficit in the 2019-20 fiscal year. The potential gap grows to $2 billion in 2020-21.

One tool Lamont could use to close that gap is to propose a labor savings target. For example, Gov. Dannel P. Malloy’s first budget proposal in February 2011 set a goal of new concessions that would save $1 billion per year.

[Unions would later ratify givebacks in August 2011 that nonpartisan analysts ultimately determined were worth about $650 million per year.]

Lamont said on the campaign trail he wanted to avoid going that route, and would focus on “reforms” that would save money without forcing workers to sacrifice. Lamont said, for example, that he would explore changes to how the state purchased medications to see if costs could be reduced.

The new governor also doesn’t have the same leverage that his predecessor had to induce worker givebacks.

The 2017 concessions deal exempted many unionized workers from layoffs for four fiscal years, running through June 30, 2021.

The only exceptions are state police troopers — who declined to accept a wage freeze as part of the 2017 deal — and workers hired after July 1, 2017, when the concessions agreement took effect.

And while Luciano is confident wage and benefit givebacks will not be sought, he and other labor leaders want Lamont and the 2019 legislature to take a new approach in other budget areas as well.

“The state of  Connecticut has pretty much balanced its budget by soaking the middle class,” Luciano said, citing a December 2014 tax incidence analysis prepared for the state.

A “tax incidence” report studies which groups effectively pay taxes and how those burdens are shifted. For example, families and individuals that rent their housing effectively pay property taxes that their landlords built into the monthly rent.

The report found that Connecticut’s state-and-local tax system, which is heavily reliant on a regressive property tax, hammers low- and middle-income households.

The poorest households in Connecticut in terms of adjusted gross income, about 725,000 filers earning an average $48,000 per year, effectively spent 23.6 percent of that on state and local taxes in 2011.

By comparison, about 15,000 households earned in the range of $600,000 to $2 million, and effectively spent 7.7 percent of their income on state and local taxes.

Lamont has proposed expanding the property tax credit within the state income tax system to reduce burdens on low- and middle-income families between now and 2022.

But the new governor, a Greenwich millionaire, also has said he won’t alter state income tax rates. And labor leaders said there’s only so much relief that can be provided to the poor and middle class — if the wealthy aren’t asked to pay more.

“We’re asking the legislature to re-look at shifting some of that burden from working people to those that can most afford to pay taxes,” Luciano said, adding this also could include higher taxes on corporations and the repeal of  sales tax exemptions on luxury items.

“Everything should be looked at for a courageous budget,” Luciano said, adding some tax advice for Lamont. “I think values matter and I think if he wants to do the right thing by the state of Connecticut he has to find a way to (build) a high-road economy.”

Critics of this approach have countered that higher taxes on the wealthy would prompt Connecticut’s largest taxpayers to leave the state, and that higher business taxes would reverse gains the state has made in curbing unemployment.

“Don’t take as gospel that taxes can’t be raised and that they can’t be raised on the wealthy,’ said Miles Rapoport, a longtime progressive whose resume includes serving in the General Assembly, as secretary of the state, and as head of the national offices of Common Cause. “The top 1 percent in Connecticut are doing just fine.” 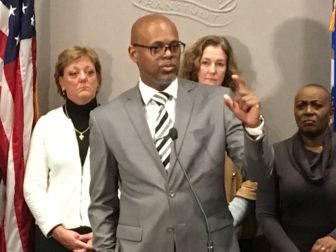 Labor leaders said that “high-road economy” also should include investments in local schools, in public colleges and universities, and in quality state services for Connecticut’s most vulnerable residents — all of which have faced lean budgets in recent years.

“Why should our young folk suffer?” said Pastor Rodney Wade from the Long Hill Bible Church in Waterbury. “If we really care about people then we will make this budget about people.”

Kara Phillips a supervising nurse in the Department of Correction, said “years of underfunding” have left Connecticut with a shortage of nurses and other providers to treat mental illness in the prison system.