A new push for a public option in Connecticut 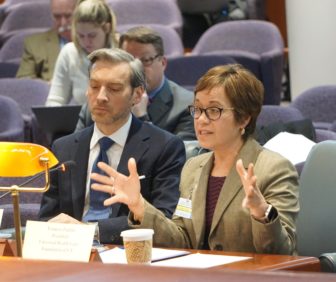 The ambitious co-chairs of the legislature’s Insurance and Real Estate Committee, Rep. Sean Scanlon of Guilford and Sen. Matt Lesser of Middletown, have been quietly working for months on how to nudge Connecticut into the ranks of blue states exploring a public option for health coverage.

The first public glimpse of their work came Wednesday at an informational hearing featuring state and national advocates of returning the state to the forefront of health care reform, an issue at a stalemate in Washington since the election of a president committed to the repeal of Obamacare.

“Today is all about hearing from some experts about what the need is, what’s worked in other places, what might work here, and then we intend to have a pretty serious conversation about this,” Scanlon said. “We’ve worked hard for the last two or three months with various stakeholders to come up with a plan.”

Their focus appears to be on two market segments: Small businesses, about half of whom offer no health coverage, and individuals who make too much money to qualify for assistance under the Affordable Care Act. But the specifics of their evolving plan will not be released for several weeks, they said.

The invited witnesses included Jacob Hacker, the Yale political science professor who refers to himself as the “father of the public option,” two national experts who are now advising other states, and three others who provided a political and policy perspective from Connecticut, including Comptroller Kevin P. Lembo.

All six witnesses offered measures of encouragement and caution, saying states could play a constructive role in providing affordable health coverage, while warning that missteps could carry a high price of destabilizing the insurance markets or incur costs to a state government that can ill afford it.

“To me, this is an opportunity for us. We should seize it, but we should be careful, because it is possible to do this badly,” Hacker said. “And we all want to do this well. We want this to be a positive example that the rest of the country will look to.”

Public options can take many forms, and studies are under way in California, Delaware and Oregon. Hacker’s original contribution came as a graduate student at Yale, when his research on Medicare expansion fueled a debate about including some form a public option in the Affordable Care Act.

“I guess, since that was a long time ago, my baby has grown up and left home,” Hacker said. “But I’m happy to say that it’s actually returning the national stage.”

Lembo, who oversees the provision of health coverage to 190,000 state employees and family members, has suggested for years that Connecticut could institute a public option by leveraging the purchasing power of the state employee plan. As envisioned by Lembo, the cost of the plan would be born by premiums, not a state subsidy. Connecticut has lower administrative costs than private plans, providing savings to consumers, he said.

“It’s exciting stuff. So many of us have been talking about this issue, this possibility, the challenge, for quite some time, but I feel l like we’ve got tail wind here,” Lembo said. “If we’re smart, and we do this thoughtfully, we probably can lay some solutions on the table that will make a significant difference in affordability and coverage options for folks.”

But Lembo also warned against overconfidence.

Frances G. Padilla, the president of the Universal Health Care Foundation of Connecticut, told the lawmakers that polling showed that half of Connecticut adults experienced a problem with health care affordability in the past year, and 43 percent either delayed or did not get care due to cost. 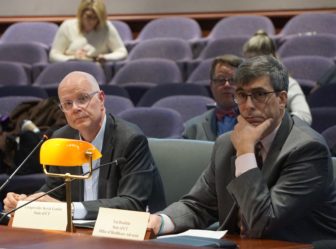 The new push for a public option reflects two political changes: In Connecticut, Democrats made solid gains in both chambers of the General Assembly; and nationally, congressional Democrats largely ran on health care, promising various ways of reducing the cost of health insurance, often under the not-always accurate slogan of “Medicare for All.”

“I think one of the things that is fascinating is that the new legislators who are representing districts not previously represented by Democrats in conservative areas are saying the issue they are hearing more about than anything else is the need for a public option,” Lesser said.

Lesser and Scanlon, who each considered running for statewide office in the past year, are new partners on the insurance committee. Scanlon, a close ally of House Majority Leader Matt Ritter, D-Hartford, and a three-term legislator, was named co-chair in his second term. Lesser was elected to the Senate last year after five terms in the House, beginning when he was 25.

Gov. Ned Lamont, a Democrat who took office on Jan. 9, has not taken the lead in Connecticut, while Democratic governors are out front on the issue in California and Washington. Scanlon and Lesser say they have kept the governor’s policy staff fully apprised of their work.

“The governor looks forward to considering any and every option that helps Connecticut residents and businesses to reduce the cost of health care without burdening taxpayers,” said Maribel La Luz, the governor’s director of communications.

Congressional Democrats have filed more than half-dozen bills calling for some form of a public option, some that would leave no role for private insurers, a political non-starter in Connecticut, the home of major health insurers like Aetna and Cigna.

Lembo and Ted Doolittle, the state healthcare advocate, said private insurers play major roles in the delivery of coverage in government-funded programs, ranging from Medicare to the state employee health plan, and they would have a role in any public option offered in Connecticut.

The others to testify were Cindy Mann, a consultant who was the top federal Medicaid official during the Obama administration, and Dan Muese, the deputy director of a Princeton University center that advises states on health care reform and the implementation of the Affordable Care Act.

Mann said states are considering public options based on existing government health systems, including Medicaid and Medicare. Those systems would provide infrastructure, such as a claims system, not a method of funding, she said.