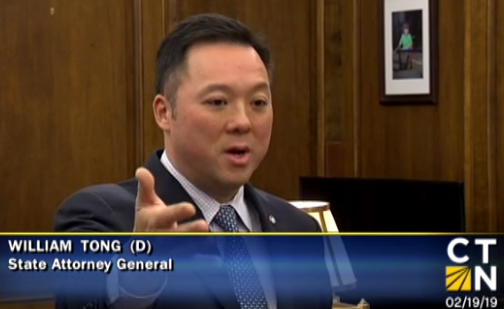 California, the lead state in the lawsuit that aims to block President Donald Trump from tapping military construction funds to build a border wall, has a lot at stake — nearly $820 million in projects Congress has approved for the state’s many military installations.

Connecticut has much less on the table. Congress has appropriated less than $2 million in the 2019 federal budget to construct a deicing facility for Air National Guard planes and a vehicle maintenance shop at Bradley International Airport.

Regardless of the amount of military construction money at risk, Connecticut, California and 14 other states say they will each be hurt as the president looks for about $6.6 billion for his wall between the United States and Mexico. The suit was filed after Trump declared his intention last week to use his emergency powers to pay for the construction of the wall.

“We have very similar interests and we are very much aligned,” said Connecticut Attorney General William Tong at a press conference in Hartford on Tuesday.

The lawsuit, filed in federal court in California late Monday, said “the redirection of funding from authorized military construction projects located in Plaintiff States will cause damage to their economies.”

“Plaintiff States will face harm to their proprietary interests by the diversion of funding from military construction projects for the States’ national guard units,” the lawsuit said. “ And the construction of a wall along California’s and New Mexico’s southern borders will cause irreparable environmental damage to those States’ natural resources.”

The Trump administration has said $3.6 billion in military construction money will be diverted to the wall. But it is also eyeing $2.5 billion of military narcotics funding, which could also have an impact on the state, Tong said, adding that “it’s a fluid and developing situation” that could result in other diversions of federal funding that could hurt Connecticut.

“The president took this action last week and it’s hard to know fully yet what the president is doing,” Tong said.

The coalition of attorneys general who are suing Trump and his administration all come from states with Democratic governors, except Maryland. They say they are suing the president because he is violating the U.S. Constitution by flouting Congress, which has authority over the federal purse, to fund the border wall.

Their 56-page complaint argues that diverting money Congress designated for other purposes violates the separation of powers defined in the Constitution.

Tong accused the president of “shredding” and “stomping on” the U.S. Constitution.

The lawsuit also says that the “federal government’s own data prove there is no national emergency at the southern border that warrants construction of a wall. Customs and Border Protection data show that unlawful entries are near 45-year lows.”

The Justice Department did not immediately respond to a request for comment.

The president and his allies say they have the right to declare a national emergency at the border and tap military funding for national security reasons, as other presidents have done in the past.

Sen. Lindsey Graham, R-S.C., said Sunday on CBS News’ “Face the Nation” that he supports Trump’s decision, even if the diversion of military construction money to build a border wall means jeopardizing projects such as the construction of a middle school in Kentucky and housing for military families.

“Yes, it is an emergency.” McCarthy told Fox News. “I believe at the end of the day, this wall is going to be built. Not sea to shining sea, but about 200 miles.”

There are questions about how fast Trump can build his wall, even as he says it’s a top priority that requires the declaration of a national emergency.

Congress appropriated a total of about $1.7 billion for the wall in 2017 and 2018 and that money has not all been spent. And a new spending bill Congress approved last week to avert another partial government shutdown contains an additional $1.375 billion for a border barrier.

The multi-state lawsuit may carry the most weight, but several nonprofit organizations already have gone to court or announced plans to sue.

Connecticut is involved in more than 40 multi-state lawsuits against the Trump administration.