It may be bumpy, but Lamont sees ‘a path forward’ 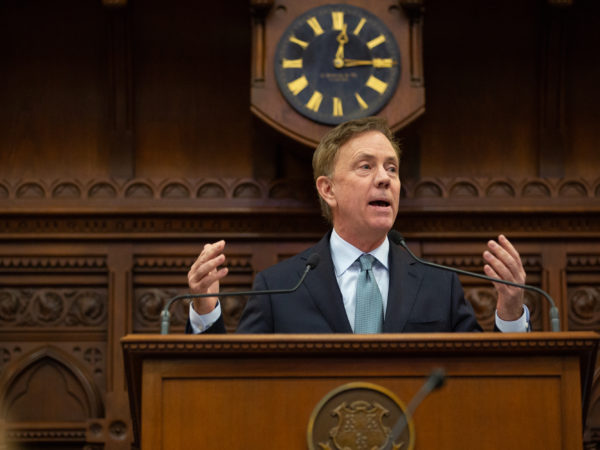 Gov. Ned Lamont cast his first budget proposal Wednesday as “a path forward,” a map for a wealthy state struggling to wriggle free of a crushing pension debt amassed over decades, end crippling cycles of deficits and spark economic growth.

In a televised, 35-minute speech to the General Assembly, Lamont politely challenged lawmakers to suggest improvements if they don’t like his approach, pleading for “a different type of politics.” But at least for now, the new governor drew few hard lines beyond which he would not cross, all but inviting a robust debate.

“Politics in Washington is a dysfunctional mess. Let’s show that here in Connecticut, we can work together on an honest budget, on time, one that gets our state moving again,” Lamont said. “When we disagree, don’t go to a microphone. Come to my office. My door is always open. Let’s get it done.”

The plea prompted an extended standing ovation from both sides of the aisle.

But other applause lines — promises of a higher minimum wage, a paid family and medical leave program, a pledge to preserve collective bargaining for state employees — only resonated among the majority Democrats.

“I think it is a responsible budget that meets our needs. We are facing a deficit of about $1.5 billion in the next year and more than that in the year after that,” said Senate President Pro Tem Martin Looney, D-New Haven. “We need some additional revenues. We also need to make sure we have an economic development plan that keeps the state moving forward and promotes job development. I think that’s a key.”

Republican leaders, however, responded coolly after the speech to the governor’s ideas for raising new revenue.

“Well, clearly Governor Lamont has an interest in fixing the state,” said House Minority Leader Themis Klarides, R-Derby. “I think unfortunately the way he’s trying to do it now is only hurting Main Street America. The middle class is being hurt by far the most in this. I believe in a path forward for Connecticut as the governor mentioned, but this is not the path.”

Lamont, 65, a Democrat and Greenwich businessman, is only Connecticut’s second governor since Chester Bowles, who was elected in 1948, without experience as a legislator in either Hartford or Washington. The other was his predecessor, Dannel P. Malloy, who was mayor of Stamford for 14 years.

Since taking office on Jan. 9, Lamont has invited a steady procession of legislators and other stakeholders, including the state-employee unions that contributed to his victory, to the Executive Residence, listening more than talking.

“Politics in Washington is a dysfunctional mess. Let’s show that here in Connecticut, we can work together on an honest budget, on time, one that gets our state moving again.”

On Wednesday, it was Lamont’s turn to speak.

He was not quite as relaxed as during his inaugural on Jan. 9, when he displayed a goofy charm, offering commentary and asides on his own speech as he delivered it. There were no taxes on the table then, no tolls, no hard requests. But he occasionally ad libbed, playing off the lawmakers’ applause —or their silence.

His promise to save nearly $600 million a year by curtailing borrowing and putting the state on a “debt diet” drew predictable applause.

“Now, I’ve talked to a lot of you,” he said. “I know you agree in principle, but then you generally have ‘one more special project that’s in the queue in my district.’ So be forewarned — if it is not tied to economic or workforce development, or cost-saving shared services, Connecticut is on a debt diet – and I am going to make sure we stick to that plan.”

He raised his voice, punching what was intended to be an applause line.

Lawmakers offered only a stony silence.

That prompted laughter — and applause.

If Lamont faces resistance from lawmakers about closing the bonding favor bank, he is looking at trench warfare over his call to end sales-tax exemptions for most everything but groceries and prescription medications. He noted he is seeking no raises in the rates for income or sales taxes, but said Connecticut needs to modernize its sales tax structure.

“Our current sales tax is designed for a Sears Roebuck economy driven by over-the-counter sales. Today we live in an Amazon economy, which is driven by e-commerce, digital downloads, consumer services,” he said. “So my sales tax reform would broaden the base so that digital goods are treated equally and more significantly that we are capturing a growing segment of the economy.”

He suggested there is no rhyme or reason to the current exemptions. Haircuts are exempt, not manicures. Netflix is exempt, not movie tickets. Lamont insisted he knows the size of the fight he is inviting, that he has been warned off by legislative leaders and rank-and-file lawmakers.

“Believe me, I’ve been forewarned by all of you —there was bipartisan consensus on this — that every tax expenditure has a strong lobby behind it and the pushback will be ferocious,” Lamont said.

The new governor promised to push back.

For the first time since announcing Saturday he would propose options for electronic tolling on all motor vehicles — not just trucks, as he promised during his campaign — Lamont explained his rationale to a live audience.

The governor said his lawyers convinced him that trucks-only tolling would survive judicial scrutiny only if the tolls were collected on specific bridges to pay for their reconstruction. He promised Connecticut car drivers would get discounted rates, as other states provide to their motorists. 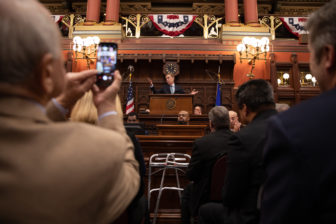 “By the way, it is estimated that over 40 percent of tolling revenue would come from out of state. As we foot the bill when we travel through their neighboring states, it’s time for out-of-state drivers to help foot the bill for fixing our roads and bridges,” he said.

Republicans, who see tolls as a wedge issue for 2020, did not.

Lamont cast tolling as part of a larger plan to grow the economy,  saying there is little chance of extended growth without modern transportation infrastructure, and there is no way of modernizing infrastructure without tolls.

Tolls would allow Connecticut to speed rail service from Hartford through New Haven and Stamford to New York City and add more frequent service to Waterbury and New London, he said. They also would help his economic-development team when companies ask about gridlock.

“Rather than nervously looking down at our shoes or checking our watch, our economic development team will now be able to answer, ‘I’m glad you asked me that,’ ” he said.

“I believe in a path forward for Connecticut as the governor mentioned, but this is not the path.”

Lamont faces structural deficits, as did his predecessor, but the immediate task is not as daunting as the $3.7 billion shortfall that greeted Malloy. In some ways, however, Lamont faces a more difficult political task.

Eight years ago, Democrats working with their first Democratic governor in two decades readily yielded to Malloy on difficult revenue questions, such as the $1.8 billion tax increase Malloy proposed in his first budget. The novelty of working with a Democratic governor is long gone — as Malloy discovered in his final two years in office, when legislators shut him out of budget talks.

Lamont needs to find his own path forward, as well as a way to coax lawmakers to join him on the trip. That is a work in progress.

A key talking point Wednesday was Lamont’s intention to break the cycle of deficits, a tempting prospect for lawmakers exhausted by the constant struggle to balance budgets, ignoring the future while paying off debts from the past.

“I will not allow this budget to be another scene from Groundhog Day, where I come to you year-after-year, hat-in-hand, lamenting the fact that we still haven’t addressed our structural deficits,” Lamont said. “Fixed costs inherited from the past consume nearly a third of Connecticut’s budget – much more than our peers. This hurts our ability to make investments in our future.”

He said he can offer a solution, but only if he is backed by lawmakers, selling his plan to business and labor, mayors and selectmen, town councils and boards of education.

Everyone is going to have to sacrifice — take a haircut, as debtors tell creditors when there is not enough money to pay everyone.  And that includes paying the sales tax on every haircut.