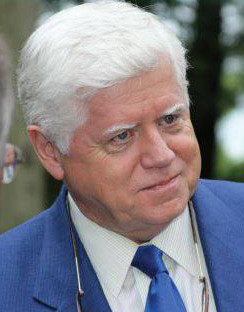 Washington – Rep. John Larson is part of a new House Democratic effort to retrieve years of President Donald Trump’s tax returns by carefully making a request for the documents in a way that would rebuff legal challenges by the administration.

The request for Trump’s tax returns will come from the House Ways and Means Committee, which has jurisdiction over the Internal Revenue Service and is headed by Rep. Richard Neal, D-Mass.

Larson, a member of the committee, said Neal has told committee members the inquiry will be tailored in a way to survive a court challenge.

“One thing we’ll make sure of is that we’ve dotted the i’s and crossed the t’s,” said Larson, D-1st District. “I think the chairman is being very scrupulous. The last thing we want to do is to rush into something and it is easily dismissed.”

The request for documents, expected in the coming weeks, would go to the U.S. Treasury Department, headed by Steven Mnuchin, and likely will be rejected. Committee Democrats are then expected to issue subpoenas for the information, which would be reviewed by Trump’s Justice Department, or file a lawsuit.

“I don’t think this is anything (the administration) is going to cooperate with,” Larson said. “I don’t think the president will say ‘Oh really, they want it? We’ll send it right over.’”

Trump has resisted releasing his returns, breaking with a recent tradition of disclosure of that information by presidential candidates.

One member of the Ways and Means Committee, Rep. Bill Pascrell, D-N.J., introduced a bill about two years ago that would require the release of Trump’s tax returns. But it did not advance because the House was in GOP hands. The bill could pass the House now, since Democrats have a majority in that chamber But the legislation would still face a roadblock in the Senate, which has a 53-seat Republican majority.

So, the Ways and Means Committee is relying on a 1924 law that gives chairmen of House and Senate tax-writing committees broad authority to demand the tax returns of White House officials.

Larson said the committee wants Trump’s tax returns to make sure the president has no conflicts of interest when it comes to trade or tax policy, issues that are under the jurisdiction of the Ways and Means Committee.

The effort to obtain Trump’s tax returns is part of a broader campaign by House Democrats, who won control of the chamber in November’s midterm elections, to ramp up oversight of the president and his administration.

The most notable probe is being conducted by the House Judiciary Committee, which opened a sprawling investigation on Monday and is seeking information from Trump, his sons, business associates and political allies.

The focus of the Judiciary Committee probe is whether the president and his administration has engaged in obstruction of justice, corruption and abuse of power. It issued more than 80 requests for information on Monday.

“We will act quickly to gather this information, assess the evidence, and follow facts where they lead with full transparency with the American people,” said Rep. Jerrold Nadler, D-N.Y, chairman of the House Judiciary Committee.

Meanwhile, Trump tweeted “Now that they realize the only Collusion with Russia was done by Crooked Hillary Clinton & the Democrats, Nadler, [Adam] Schiff and the Dem heads of the Committees have gone stone cold CRAZY. 81 letter sent to innocent people to harass them. They won’t get ANYTHING done for our Country!”

While House Democrats are ramping up their investigation of the president and his administration, most are careful to avoid saying the goal is to impeach Trump. Polls, including one released by Quinnipiac on Tuesday, show impeachment of the president is not popular.

The Quinnipiac poll determined 59 percent of respondents said Congress should not begin impeachment proceedings against Trump, while 35 percent favored that action.

The poll was taken after Michael Cohen, the president’s former lawyer, gave testimony critical of the president to Congress last week. It said a sizable number of voters, 64-24 percent,  said they believed the president committed crimes before he became president, but were divided 45-43 percent, on whether Trump committed a crime after he was sworn into office.