Lamont: ‘As a small-business person…’ 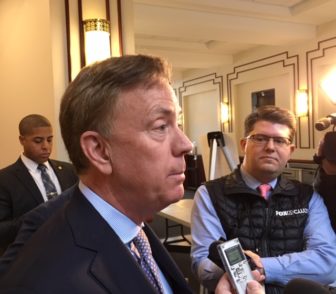 Gov. Ned Lamont stressed his small-business background Friday in pushing back at a proposal by labor Democrats to require payment of the minimum wage to trainees and then offering support for the concept of a public option for health insurance.

With those two positions, the Democratic governor set himself at odds with some liberal Democrats on the minimum wage and in support of a longer-range effort by others to help small businesses offer health insurance to employees.

“I think some sort of a public option, where small business could buy in, makes a lot of sense,” Lamont said. “It’d be a big benefit to small business.”

Under two measures proposed Thursday by legislators, the state health plan would be opened to nonprofits and companies with 50 or fewer employees, and an advisory council would be created to guide the development of a public option for individuals.

Lamont, whose office is engaged in negotiations over terms of a minimum wage increase, reiterated his desire to preserve and even expand the ability of employers to pay less than the minimum wage for short periods. The governor has endorsed raising the minimum to $15, but not as quickly as proposed by legislators.

The co-chairs of the legislature’s Labor and Public Employees Committee want to eliminate any training wage.

“Look, it’s something I’m willing to look at, but as a small-business person I want to make sure that businesses have an incentive to give young people who perhaps don’t have the training they need to have that first opportunity,” Lamont said.

Lamont is the founder of Campus Televideo, a company he sold in 2015. It specialized in cable systems in colleges, universities and gated communities.

A pitch about gender diversity on International Women’s Day

The governor spoke to reporters after opening the first meeting of the Governor’s Council on Women and Girls, which is led by Lt. Gov. Susan Bysiewicz and Melissa McCaw, the secretary of policy and management. The council includes representatives of every constitutional officer and legislative leaders, plus every state agency head. 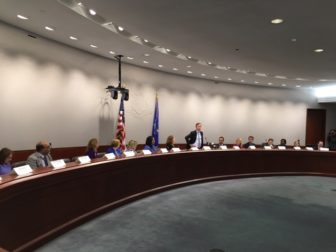 “I’m so proud of what Melissa and Susan have put together here with this commission, with this council,” Lamont said. “But more importantly, I love the fact that we have an administration — you saw the commissioners out there — about half women, half men, incredibly diverse,” Lamont said.

Lamont has named 14 new agency heads, half of whom are women. Six of the new appointees are black or Hispanic. Lamont also has retained four female and six male agency heads from the previous administration.

He said diversity is important for two reasons.

“One, I want Connecticut to be able to look at my administration and see somebody just like them and say, ‘I could do that, too, someday.’ And just as importantly when I sit at the table, I want to have different points of view represented,” Lamont said.

The new council is responsible for “a coordinated response to issues impacting the lives of women, girls, their families and the state of Connecticut,” the governor’s office said. Its first meeting was on International Women’s Day.