On gun control, a mother speaks for a dead son 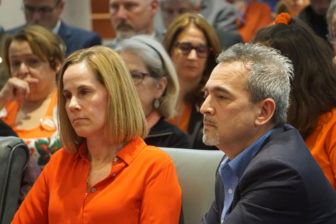 Kristin and Michael Song. Their son, Ethan, died playing with a gun belonging to a friend’s father.

On the day he died from a gunshot, 15-year-old Ethan Song had enjoyed a rite of passage for American teens: The removal of orthodontic braces, the big reveal of a new smile. His mother, Kristin, snapped a photo and sent it to her husband, Michael.

It was the last taken of their youngest boy.

Kristin and Michael Song testified Monday in support of state legislation requiring gun owners to safely store untended firearms, whether loaded or unloaded. Current law applies only to loaded weapons, even if ammunition is available. Michael toted a gun safe, a heavy box with a digital combination lock that he says could have saved Ethan’s life.

It was one of seven firearms bills up for a public hearing, a mix of gun-control and gun-rights measures, and part of the unending conversation about how firearms can or should be regulated in a nation where the the U.S. Supreme Court has ruled that the Second Amendment means gun ownership is a constitutional right, though not an absolute one.

The debate has special resonance in Connecticut, where more than a quarter-million residents have pistol carry permits, and firearms are sources of pride and horror. Hartford is where Samuel Colt produced the Peacemaker, the six-shooter that won the west. Sandy Hook is where 26 children and educators died in a school shooting committed with an AR-15, the most popular rifle in the U.S.

The hearing was relatively muted, even though it began with testimony from Kristen, delivered from the jarring perspective of her dead son. She was composed, recalling what had been a good day, then imagining her son’s shock after realizing that the .357 Magnum in his hand, one of the three guns that had become secret playthings at a friend’s house, was loaded.

“Oh my God what did I do? How did a bullet get in the gun? We had been dry firing them for months and nothing happened. Who loaded the gun? I can hear my friend calling 911. I am trying to breathe, but there is so much blood. I keep choking on it. I am in and out of consciousness. No, please God…”

The gun was one of three owned by Ethan’s friend’s father, a private investigator. All three were stored in cardboard box inside a Tupperware container in the master bedroom closet. The guns had trigger locks, but the keys were in the box. So was the ammunition. A prosecutor found no evidence to show the gun was loaded, a necessary element to charge criminal negligence.

Kristin sat between Michael and their legislator, Rep. Sean Scanlon, D-Guilford, as she read four-pages of single-spaced typed testimony. No one interrupted, not when a three-minute timer softly chimed, a warning her time was up. She spoke for several more minutes. Near the end, her husband rubbed her back. 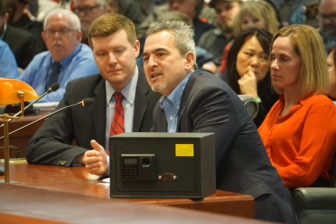 Rep. Sean Scanlon, left, with Michael and Kristin Song, who brought a gun safe to the hearing.

“I thought it was so important for him to be present,” she said later, explaining her decision to speak in Ethan’s voice. “And I also thought it was really important for people not to sterilize the situation, that there was a real life attached to this bill and he was honestly that day, so excited for the rest of his life.”

Kristin based the testimony on the journal he kept and on her own recollections of the day, the way he tolerated her hugging him in the orthodontist’s office and proclaiming he was handsome, his talkative mood over bagels and lox they bought in celebration. He wanted college, a military career and a big, big family — if he could just figure out girls. It had been a good day.

The journal entries she read after his death said nothing about the guns they come to secretly handle, returning them undetected to the cardboard box in the private investigator’s close.

“Believe me,” she said, “I looked through everything.”

“It’s hard to listen without tearing up,” Rep. Craig Fishbein, R-Wallingford, told the Songs during the hearing. “I’m there with you, and I want to see something happen here.”

No one pointed to a middle ground on the other gun proposals, however.

A second gun-control bill on the agenda would require anyone carrying a firearm to present their carry permit if asked by a police officer. Under current law, police can ask, but there is no requirement they comply. A third would prohibit gun owners from leaving a firearm in a car, unless secured in a gun safe. A fourth, aimed at making so-called “ghost guns” illegal, would require home-built guns to have to serial numbers.

The latter bill was prompted in part by the ability of people to manufacture firearms with 3D printing programs.

Gun owners favored bills that would allow them to carry firearms in state parks, bar municipalities from regulating the ownership and use of firearms, and allow the transfer of the ownership of firearms defined as assault weapons under state law. Owners of such weapons were allowed to register and keep them after their sale was prohibited.

Scott Wilson, a co-founder of the state’s largest gun-owners group, the Connecticut Citizens Defense League, said the state should improve gun education, not punish gun owners. He noted that when the original storage law was passed in 1990 after another child’s accidental death, there was language encouraging, though not requiring, gun-safety education for students in grades K-8.

Every child should be taught to treat every firearm as though it is loaded, he said.

“Nobody ever did anything with it,” Wilson said. “Here we are 29 years later, we’re thinking in this case, possibly Ethan’s life could’ve been saved, possibly other lives could have been saved in that time, from accidental shootings.”

But he added that no one is suggesting gun owners do not bear responsibility for safe storage. (The CCDL’s legislative director, Ray Bevis, suggested in written testimony that the storage bill be amended to offer a $150 tax credit for the purchase of a gun safe and mandatory gun-safety education for children.)

“There’s not a question in my mind or the minds of anybody in this organization that parents have an obligation to keep their firearms safely stored,” Wilson said. “However, given that those protocols often fail, if students and children have the opportunity to have some education, it would benefit them greatly.

“And you know my story.”

Willson was shot when he was 14. A friend of his brother’s brought a pistol to their house. All three boys thought it unloaded. His brother pulled the trigger, firing a bullet that hit Wilson’s shoulder and ricocheted into his neck, hitting an artery and lodging against his spine. He recovered use of his arm only after extensive physical therapy.

Brian Corbino of Southington, a gun owner, said the storage bill would create a false sense of security. He called the requirement for gun safes to be “fake security theater.”

“I would argue that safety is everybody’s job,” he said.

Rep. Matt Blumenthal, D-Stamford, a former Marine with experience as a range safety officer, challenged him, asking, “Why should we expect a four-year-old to be educated and handle those firearms safely when they are not locked up?”

“I’m not saying don’t lock your guns up. What I’m saying is don’t put your guns in a $100 box and think that you’re safe,” Corbino said. “Security is a mindset. It’s not a thing.”

5 thoughts on “On gun control, a mother speaks for a dead son”