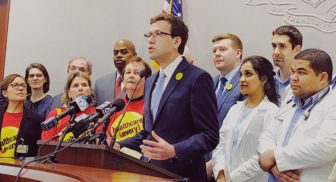 Legislation that would extend state health benefits to small businesses, nonprofits and individuals cleared a key hurdle Tuesday, winning a favorable vote from the Insurance and Real Estate Committee.

Under two proposals, officials would open the state health plan to nonprofits and small companies – those with 50 or fewer employees – and form an advisory council to guide the development of a public option. The measures would allow the state to create a program, called “ConnectHealth,” that offers low-cost coverage to people who don’t have employer sponsored insurance.

Comptroller Kevin Lembo’s office would partner with one or more private insurers under an umbrella contract to provide plans outside of the state’s risk pool. The plans would meet the standards outlined in the Affordable Care Act.

“I am confident … that this is a bold step to fix a big problem,” said State Rep. Sean Scanlon, a co-chairman of the insurance committee. “When I heard from my constituents, what I heard loud and clear was that they are sick and tired of feeling like the quality of their insurance is going down at the same time that the cost of insurance is going up. This bill is a really innovative thing.”

If adopted, small businesses could join the state health plan as early as January. Less than half of Connecticut’s small companies offer health insurance to their workers, legislators have said, despite collectively employing more than 700,000 people – about half of the state’s workforce.

The public option would be created with input from the advisory council. It would require a second round of legislative approval, and wouldn’t roll out until 2021.

The council will examine the financial impact of the public option. Sen. Matthew Lesser, D-Middletown, the insurance committee’s other co-chairman, estimated that startup costs would amount to less than $1 million.

Republicans have called the price tag unrealistic. Sen. Kevin Kelly, a ranking member of the committee, said he feared the plan would be costly for the state and “crowd out already limited funding for core services.”

“I’m very much concerned about this blowing back on the taxpayers and the middle-class families who can’t sustain that kind of additional burden right now,” he said.

Others celebrated the move.

“This is one way that we’re going to make sure that people have access to health care,” said state Rep. Lucy Dathan, D-New Canaan.  “It is a human right.”

Lembo, a proponent of the measures, praised insurance committee members.

“A growing bipartisan coalition has decided that Connecticut will not walk away from an opportunity to make it more affordable for businesses to grow here, and for families to access the best health care at the best price,” he said in a statement.

If the bills pass both chambers, Connecticut could be the first state in the nation to adopt a public option.

The committee on Tuesday also greenlighted legislation that would hold insurance providers accountable for complying with state and federal parity laws by requiring them to submit annual reports detailing their coverage of mental health and substance abuse services.

The bill also mandates that insurers cover drugs prescribed for substance abuse treatment, and that they cover treatment regardless of whether it is court ordered.