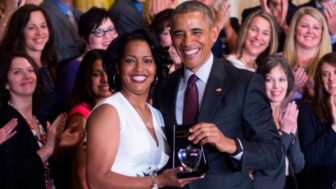 Washington – Rep. Jahana Hayes has accepted an invitation to meet with former President Barack Obama at a gathering of  Democratic House freshmen on Monday evening.

Speaker Nancy Pelosi, D-Calif, is hosting the reception at a private home in Washington D.C.  to “celebrate the freshman class of the 116th Congress.”

Obama has met Hayes before, most notably when he gave her an award for National Teacher of the Year in 2016.

Obama also endorsed Hayes when she ran for the 5th District congressional seat last year. While some of the members of the large, 60-plus Democratic freshman class may never have met the former president before, about a dozen of the new lawmakers worked in his administration.

Because of their size and diversity – many are women and/or minorities, like Hayes, who never worked in politics before — this year’s freshman class has broken with the tradition that those without much seniority in Congress be “seen and not heard.”

Not yet three months into their congressional careers, the freshman class has made its mark.

Rep. Alexandria Ocasio-Cortez, D-N.Y., has become a high-profile progressive leader with an enormous social media following. She is also a lightning rod for conservative criticism.

Fellow freshman Rep. Ilhan Omar, D-Minn, has been embroiled in controversy – twice—because of comments that some considered anti-Semitic.

And Hayes drew attention by questioning Pelosi over the scheduling of a resolution condemning anti-Semitism that was prompted over the furor over Omar’ comments. Hayes said lawmakers had not had a chance to read the final resolution, which had been amended many times.

Hayes’s profile has also been raised by her appearance — alongside Pelosi, Omar and Ocasio-Cortez — on the cover of Rolling Stone magazine.

One thought on “Hayes to attend freshman gathering with Obama”