Mueller may have ended his probe of Trump, but CT Dems have just begun theirs 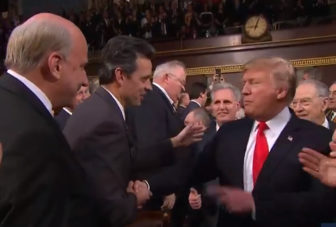 President Trump greeting members of Congress after his State of the Union Address.

Washington – While a summary of  Robert Mueller’s report said there is no evidence the Trump campaign colluded with Russia to meddle in U.S. elections, congressional Democrats will continue separate investigations into that subject and others —and Connecticut lawmakers will be in the thick of some of them.

As soon as Democrats seized control of the U.S. House in November’s elections, months before the Justice Department announced the end of Mueller’s 22-month probe Friday, Democrats were working under a Plan B to conduct their own investigations.

Those probes are aimed in part at undermining President Donald Trump going into the 2020 presidential race, just as Republicans sought to undermine Hillary Clinton through a number of congressional investigations before the 2016 elections.

Investigations in the Democratic-controlled House stretch across six committees, including the Judiciary, Intelligence, Financial Services and Oversight Committees. That is likely to  give members of Connecticut’s all-Democratic congressional delegation high-profile roles.

For instance, Rep. Jim Himes, D-4th District, is a member of both the House Intelligence and Financial Services committees. “The Intelligence Committee will ask ‘are there any outstanding questions about the Russian attacks?’” Himes said.

One of those questions, Himes said, is why former Trump campaign manager Paul Manafort shared internal polling data with Konstantin Kilimnik, a Russian business associate with ties to Russian intelligence.

Himes is part of the Democratic chorus demanding a full release of Mueller’s report, which was summarized with the help of bullet points by Attorney General William Barr over the weekend.

Himes said full disclosure is needed to learn “how people should behave in the face of an investigation,” more specifically, why so many involved in the probe lied about their Russian contacts. He said  Mueller’s investigation looked into criminal activity, but Congress has a broader role. “And that is to fully understand the Russia attack and make sure it doesn’t happen again,” Himes said.

While U.S. Attorney General William Barr said Mueller’s report “did not find that the Trump campaign or anyone associated with it conspired or coordinated with Russia in its efforts to influence the 2016 U.S. presidential election,” it did not draw a conclusion on whether Trump obstructed justice during the investigation and “does not exonerate” the president.

Himes said he was “not terribly” surprised at the conclusions of Mueller’s report. “Nobody should have expected a Hollywood blockbuster ending,” he said.

Instead, there will be a drip, drip, drip of congressional hearings, some coupled with Democratic subpoenas, into allegations of public corruption, foreign influence over Trump, presidential abuses of power, Trump’s banking relationships, and efforts to quash embarrassing stories about the president in the National Enquirer.

On Monday, Democrats leading committees that are investigating the president wrote Barr demanding full release of the Mueller report by April 2.

“Your March 24 letter concerning special counsel Robert Mueller’s report leaves open many questions concerning the conduct of the president and his closest advisers, as well as the Russian government during the 2016 elections,” they wrote.

The Democratic chairman also said “the release of the full report and the underlying documents and evidence is urgently needed by our committees to perform their duties under the Constitution.”

Rep. John Larson, D-1st District, is a senior member of the House Ways and Means Committee who is seeking a copy of Trump’s tax returns.

The Ways and Means Committee, headed by Rep. Richard Neal, D-Mass, has oversight of the Treasury Department and is relying on a 1924 law that gives chairmen of House and Senate tax-writing committees broad authority to demand the tax returns of White House officials.

“Chairman Neal and his legal team are being very thorough in building a rock-solid case when requesting the president’s tax returns,” Larson said. ”I fully support and trust his leadership and efforts on this.”

Democrats on the panel say they want Trump’s tax returns to make sure the president has no conflicts of interest when it comes to trade or tax policy.

Meanwhile, Republicans say new investigations needed into exactly why and how the probe that led to the appointment of Mueller as special counsel got started – probes that are intended to focus on allegations of bias at the FBI and Justice Department.

Sen. Lindsey Graham, R-S.C., head of the Senate Judiciary Committee, initially tweeted that the summary of Mueller’s investigation indicated there was no more need  to look into the special counsel’s full report. But on Monday Graham said he planned to invite Barr to testify in front of his panel. That happened the day after House Judiciary Chairman Rep. Jerry Nadler, D-N.Y., invited Barr to testify before his committee.

“What’s next I hope is that [Attorney General Barr] will come to the committee, release as much as possible of the Mueller report,” Graham said during a press conference. “My desire is for the public to get as much of the report as possible.”

Sen. Richard Blumenthal, D-Conn, a member of the Senate Judiciary Committee, said the panel must have Mueller’s full report in hand before Barr testifies.

“Before he appears, we need to have the document, the evidence and the facts,” Blumenthal said. “Even a garden variety deposition in a civil case needs to have documents.”

The House has voted, 402-0, on a non-binding resolution asking for the full release of the Mueller report.

Blumenthal, and Sen Charles Grassley, R-Iowa, have introduced a bill  in the Senate that would mandate release of that report, but the Judiciary Committee has not acted on the legislation.

Blumenthal said there is bipartisan support for the release of the Mueller report,  “but if they want transparency, they should back my bill.”

“No Collusion, No Obstruction, Complete and Total EXONERATION. KEEP AMERICA GREAT!,” he tweeted

While the president’s tweet may not be accurate, Barr’s summary of Mueller’s findings makes impeachment much less likely.

But House Speaker Nancy Pelosi, D-Calif., had already tamped down the chances the House would impeach the president, telling the Washington Post “unless there’s something so compelling and overwhelming and bipartisan, I don’t think we should go down that path, because it divides the country.”

“Nobody is talking about impeachment right now,” Himes said.