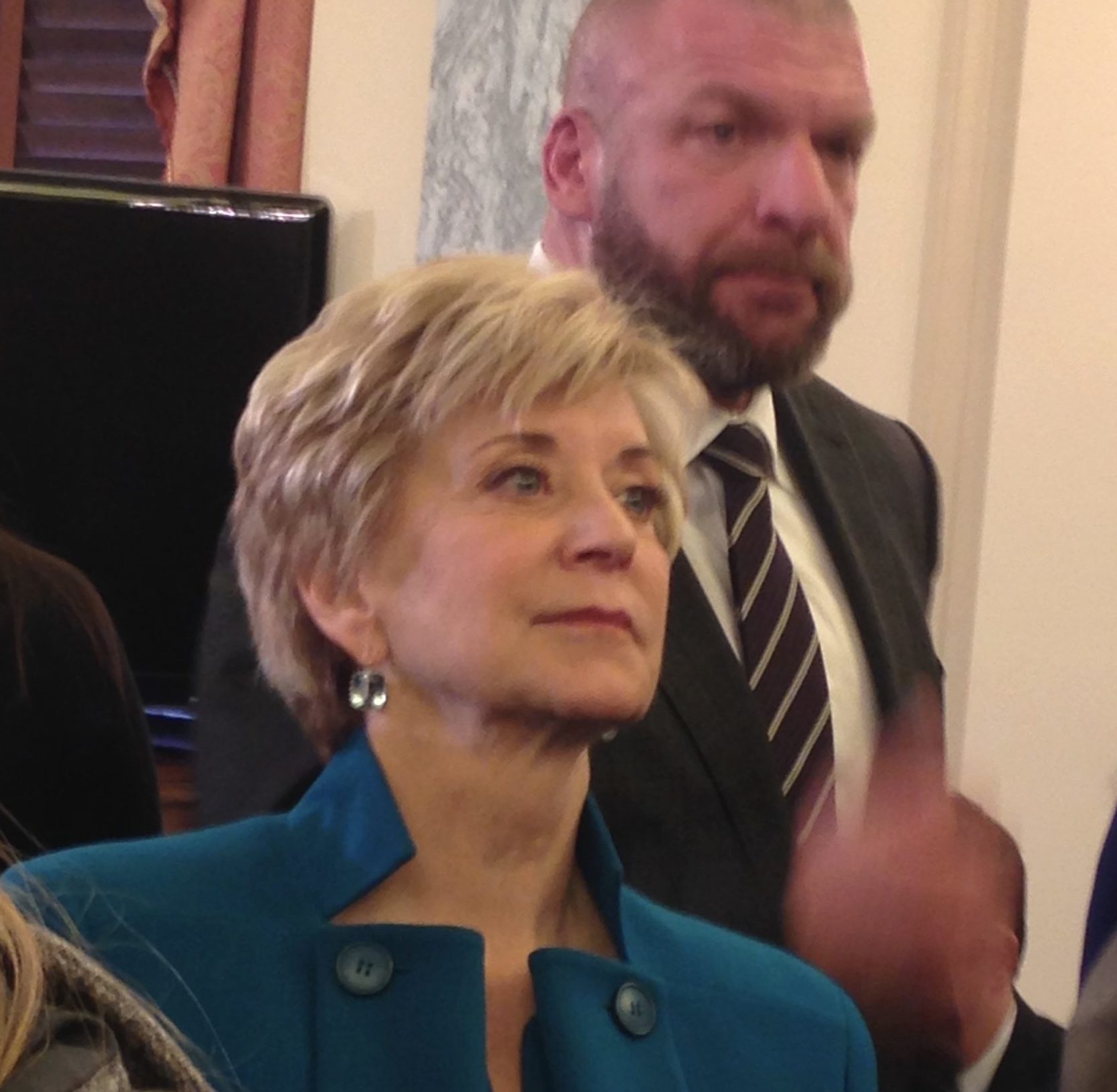 Linda McMahon at her confirmation hearing as head of the SBA.

“While it has truly been the honor of a lifetime to serve our country in this Administration, it is time for me to step down and return to the private sector,” McMahon said in a statement. ” I am resigning my position at SBA effective April 12.”

While McMahon, 70, is leaving the Trump administration, she is not quitting President Donald Trump.

According to reports, McMahon will chair the America First Action PAC which has raised more than $39 million since last spring, about $10 million alone from casino magnate Sheldon Adelson and his wife. The PAC supports Trump’s candidacy and policies.

“She has been a superstar,” Trump said at a press conference at Mar-a-Lago. “She’s going to go and help us with a very, very important year and a half that we have coming up,” he added. “And the re-election as they call it. And we look forward to that.”

In the statement announcing her resignation, McMahon effusively praised Trump.

“I wish to thank the president and I will continue to be a strong advocate for him and his policies,” McMahon said.

She also said “I’ve had the opportunity to witness firsthand the transformative impact the President’s growth policies are having on communities across this country: small businesses are reporting some of the highest levels of optimism on record…raising wages, providing bonuses and benefits, and creating more jobs.”

The SBA provides loan guarantees to small businesses that might not otherwise qualify for a bank loan. Those SBA-guaranteed loans offer lower payments, longer terms and looser criteria to qualify. The SBA also makes direct, low-interest loans to those businesses impacted by disasters.

McMahon told the CT Mirror last year that she identifies with the entrepreneurs she tries to help. Like those businessmen and businesswomen, McMahon considers herself and her husband Vince McMahon risk-takers who have “had plenty of ups and downs.”

The downs included filing for bankruptcy as a young couple in 1976 and briefly receiving food stamps. After leaving her native North Carolina, the McMahons founded a sports entertainment company that eventually became the Stamford-based World Wrestling Entertainment.

Unlike other cabinet officers who have been scorched by the white-hot light of media scrutiny and Democratic criticism, McMahon has largely avoided negative publicity. A longtime friend of Trump’s, McMahon donated about $7 million to a political action committee that supported Trump’s candidacy for the White House.

McMahon is widely known in Connecticut for her campaigns for U.S. Senate.  She spent $50 million on each of her two losing U.S. Senate races, the first against Richard Blumenthal in 2010 and again in 2012, against Chris Murphy.

McMahon told the CT Mirror last year she had “no plans” to run for office again and said she took the top job at the SBA because Trump asked for her help.

“I am disappointed to hear that Linda McMahon will be leaving the Small Business Administration,” said Sen. Lindsey Graham, R-S.C. “She did a terrific job for President Trump and small businesses all over the country. She has much to be proud of and will be missed.”