Updated at 5:45 p.m. with comments from the Republican state chairman.

Gov. Ned Lamont dismissed an accusation Tuesday that his plan to replace members of the University of Connecticut Board of Trustees has anything to do with election politics.

The CT Mirror first reported Monday that the administration intends to install “a slate” of new trustees, that chairman Thomas E. Kruger would be stepping down on April 24, and that long-serving trustee Denis J. Nayden — who backed Lamont’s Republican opponent Bob Stefanowski last fall — also would be leaving.

A former GE Capital chief executive officer who has served as a UConn trustee during the administrations of Lamont’s three predecessors, two Republicans and a Democrat, Nayden also contributed $100,000 to a super PAC that helped Stefanowski buy attack ads directed at Lamont.

“No, I didn’t know anything about that,” Lamont said when asked if elections politics played any role in Nayden’s ouster. “I met this guy once. We were supposed to have a phone call sometime, you know, pretty soon.”

The second meeting with Lamont and Nayden never materialized, but Lamont said his administration is trying to change the culture on the Board of Trustees — and it has nothing to do with politics. 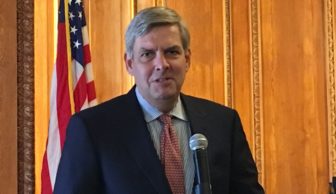 “Denis Nayden had been instrumental in the development of UConn, including helping to raise over $300 million,” Stefanowski said. “It is unfortunate that Governor Lamont appears to be putting politics ahead of the best interest of UConn students.”

Stefanowski added that “it’s an amazing coincidence that the first trustee that’s asked to leave happens to be opposed to his (Lamont’s) platform of higher taxes and tolls.”

“Gov. Ned Lamont, with all his wealth and privilege, is throwing a temper tantrum because a prominent UConn trustee supported Bob Stefanowski,” Romano wrote in a statement. “In this shocking display of political retribution, Ned removed a major asset to UConn and the state from his position because Mr. Nayden cast his ballot in November.”

The administration did not immediately respond to Romano’s criticism.

The governor’s staff hasn’t yet said how many trustees — who serve staggered, six-year terms, would be replaced.

But Lamont said that he is looking to take a new direction with the board.

“We’re going to make big changes on the UConn board,” the governor said while talking with reporters following a business visit and press conference in East Windsor. “I want a UConn board that really collaborates with small business and the business community, makes sure we’re training people … for the jobs that are going on out there. I think a little bit of new energy on the UConn board wouldn’t be bad at all.”

Lamont, however, insists that he isn’t planning to make wholesale changes.

“I wouldn’t go that far,” he said. “You need a mix. You need some institutional memory and you need some new blood, so we’re go to have some of both.”

A businessman, Lamont has said UConn needs to be a central element of the state’s efforts to grow the economy.

One of Lamont’s first acts after taking office in January was to postpone selection of a new president until he became comfortable with the ability and willingness of the search committee’s choice, Thomas C. Katsouleas, to make UConn a bigger partner in economic and workforce development.