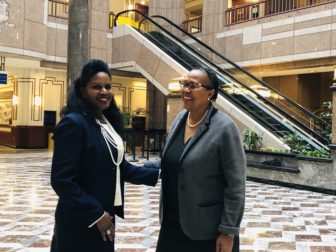 The appointments of Renée D. Coleman-Mitchell, left, as public health commissioner and Sibongile “Bongi” Magubane, right, as head of the motor vehicles department, were confirmed by a legislative committee Tuesday.

Three critical gubernatorial appointments – for head of the state’s department of motor vehicles, commissioner of public health and leader of the agriculture department – easily cleared the legislature’s joint committee on executive and legislative nominations Tuesday.

Lawmakers approved the nominations of Sibongile “Bongi” Magubane, Renée Coleman-Mitchell and Bryan Hurlburt, saying they were impressed with the candidates’ resumes and optimistic about the direction of each department.

Magubane, a former information-technology executive at Aetna, was tapped by Gov. Ned Lamont for  the DMV position in February. She was most recently the human relations director for Specialty Transportation, the bus contractor for Hartford’s public schools, but spent much of her career at Aetna, first from 1979 to 1994, and then from 2000 to 2011.

Magubane also worked as a consultant for the information technology company Keane between 1998 to 2000 and at Cigna from 1994 to 1998. Lamont has said her technology background would be an asset to the DMV, which has struggled with computer malfunctions that prompted widespread complaints. Magubane will bring “an innovative approach that works to cut red tape and brings to the DMV the solutions that so many residents of our state are demanding,” the governor has said.

On Tuesday, she told lawmakers her priorities included streamlining operations to make transactions easier and faster for people visiting DMV branches, and to tackle technology projects and redesign initiatives that will promote better service.

But one of her biggest goals is to support a better work-life balance for her employees.

“I learned that on any given day, the branch staff actually don’t know what time they’re going home because we have a policy of closing the door, but with [customers] still there and they cannot go home until all of the people have been served,” Magubane said. “For someone who was a single mother, the idea of not knowing what time you go home is not pleasant.”

Coleman-Mitchell, a former executive director for Cougar Health Services at Washington State University, also was nominated by Lamont in February. Prior to Cougar Health, she worked at the Connecticut Department of Public Health, was a deputy health director in Hartford, and was head of a health clinic in Meriden.

She told legislators Tuesday that her chief concerns as the state’s public health commissioner would be addressing chronic diseases, maternal mortality, health equity, drinking water safety and the department’s workforce development. She also hopes to establish a men’s health unit.

“I’m open to new ideas and different perspectives, and I want to implement best practices from other states or even other countries,” she said.

Hurlburt, a former Democratic state legislator who has worked to promote farming in Connecticut as a Barack Obama appointee and more recently as head of a non-profit trade group, was tapped by Lamont late last month to take over as agriculture commissioner.

Prior to his appointment, he was the executive director of the Connecticut Farm Bureau Association, which serves as a marketer for agriculture as well as an advocate for the state’s $4 billion farming industry at the State Capitol.