Hayes, DeVos spar over use of federal money to arm teachers

Washington – Rep. Jahana Hayes, a former National Teacher of the Year, Wednesday had her first chance to question Education Secretary Betsy DeVos, resulting in a heated exchange over the use of federal money to arm teachers.

Hayes, D-5th District, took DeVos to task for her handling of a request last year from a school superintendent in Oklahoma who asked President Donald Trump if he could use money from a certain program, known as Title 4a, to help arm the teachers in his schools. The White House sent the school’s superintendent Charles McMahan’s request to the U.S. Department of Education.

Hayes asked DeVos if her office had given McMahan any guidance — and asked for a yes or no answer.

“Congresswoman, that’s not a yes or no question,” DeVos said.

Hayes retorted “No, I’m not going to let you do this,” and continued to press for an answer from the secretary  – who had dodged dozens of questions from Democratic lawmakers during the hearing.

DeVos has maintained she did not have the authority to say whether money from the Title 4a  program could be used to arm teachers, that it was up to Congress to interpret the law that established those grants.  But her department did tell McMahan that the Title 4 program allowed wide discretion in the use of its grant money.

Still, DeVos told Hayes, “we have not advocated for or against” the use of federal education money to arm and train teachers.

“Your silence is a decision,” Hayes shot back.

DeVos continued to say she did not have the authority to say whether federal funds could be used, or not used, to arm teachers.

That’s when Hayes, who represents Newtown, site of the massacre of 26 children and school faculty, had her “gotcha” moment. 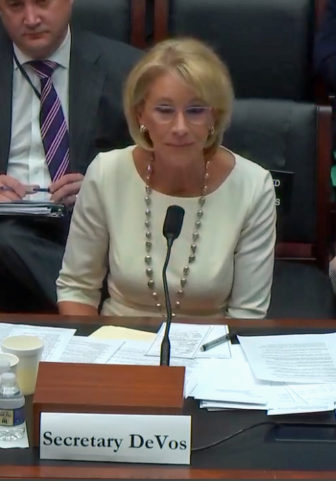 She waived an internal Department of Education memo dated July 16 of last year that was obtained through a Freedom of Information request.  It said “the Department’s Office of General Counsel has advised that the Secretary has discretion to interpret the broad language of the statute as to its permissiveness regarding the purchase of firearms and the use of firearms.”

“You have the authority,” Hayes told DeVos. “Read the memo.”

DeVos also told members of the House Education and Labor Committee Wednesday that she is “not familiar” with Obama-era affirmative action guidance for schools that the Trump administration rescinded last summer.

Rep. Joe Courtney, D-2nd District, who like Hayes sits on the panel, questioned DeVos about an inspector general’s report that said her department was doing a bad job of policing student lenders and about her decision to stop sharing information about companies that participate in the federal student loan program with states like Connecticut.

Twenty-one attorneys general, including Connecticut Attorney General William Tong, say they need this information to prosecute “shady” lenders and have demanded the Department of Education resume sharing the data with them.

“Under your leadership, the department has undermined state enforcement of student borrower protections,” Courtney told DeVos.

He also had an internal Department of Education memo to submit to the committee. It was sent to student loan companies last year advising them against sharing information with state law enforcement officials.

DeVos was unruffled. She indicated states have no role in policing lenders.