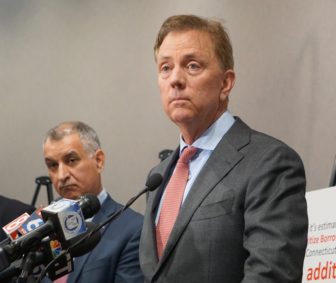 Gov. Ned Lamont and Republicans crystallized two things Wednesday about the contentious issue of returning highway tolls to Connecticut after an absence of 35 years: Lamont cannot yet definitively answer important questions about the pricing, location and frequency of tolls — and it wouldn’t matter to the GOP, even if he could.

In back-to-back press conferences, the gulf between the governor and Republican minority could not have been greater, reinforcing that if Lamont succeeds in winning authorization to establish tolls on Route 15 and Interstates 84, 91 and 95, Republicans are resolved to brand them as the product of a Democratic governor and Democratic majorities in the General Assembly.

Lamont and the Democratic co-chairs of the legislature’s Transportation Committee tried to reframe the issue Wednesday in terms of specific rush-hour commutes, assuming 4.4 cents a mile with discounts for state drivers: from New Haven to Hartford on 91, $1.72; from Stamford to New Haven on 95, $1.80; from Danbury to Waterbury on 84, $1.28.

The governor complained that Republicans, who have been assisted by a grass-roots campaign and conservative talk radio hosts in mobilizing public opinion against a proposal he rolled out in February, have created the impression he wants a tolling gantry at the end of every street.

Lamont seemed wistful about how his administration is faring in the public debate, at least for the moment.

“We have a middle class that has gotten slammed over a generation now. And they are paying a lot of money. And they feel like folks are falling behind. And that is the one thing that rings with me. I have to sit down with folks, find a fair way to do this.”

He said he understands that the public is skeptical about government’s ability to responsibly managed tolling revenue, even the money would have to be used for highway infrastructure under federal law. But he said he is most concerned about the imposition of added costs on taxpayers, imagining a conversation with one.

“We have a middle class that has gotten slammed over a generation now. And they are paying a lot of money. And they feel like folks are falling behind. ‘C’mon, guv,  you know I know we have to fix the transportation. I know borrowing is not the way to do it. But I don’t know how I can afford to do that.’ And that is the one thing that rings with me. I have to sit down with folks, find a fair way to do this.”

Republicans countered that Lamont has only a broad outline for tolling, not a detailed plan to raise the $800 million that administration officials estimate could be raised annually through tolls.  They complained that he reflexively rejected their alternative  — increasing borrowing for transportation by $700 million a year by prioritizing transportation over many other areas.

“The Republicans in the legislature are not fooled by this proposal, and the problem now is neither is the public,” said Rep. Vincent Candelora, R-North Branford. “When you go out, the public is scared, they are concerned. They don’t know what level of taxation is going to occur now.”

Republicans excoriated Lamont and his legislative allies for pushing legislation that would cede authority to the state Department of Transportation to negotiate with the Federal Highway Administration the terms of establishing tolls on Route 15 and Interstates 84, 91 and 95. 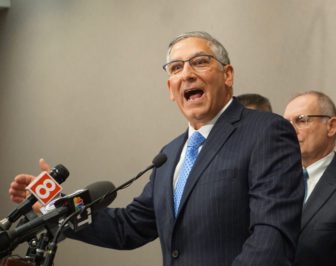 “How disrespectful could you be to the people of the state of Connecticut by saying, ‘Give us the authority and then we’ll tell you how much, and there isn’t a damn thing you can do about it,’” Fasano continued, his voice raised in anger. “That is simply outrageous.”

But Fasano and other Republicans conceded that even if the General Assembly had final say over a detailed tolling plan, the GOP was unlikely to engaged in a policy discussion about what is setting up as a major wedge issue in the 2020 elections for legislative seats.

“For us to retreat and even consider tolls, there really hasn’t been put anything on the table that makes that a viable option,” said Candelora, the deputy House minority leader.

“How disrespectful could you be to the people of the state of Connecticut by saying, ‘Give us the authority and then we’ll tell you how much, and there isn’t a damn thing you can do about it.'”

Donald J. Shubert, the president of the Connecticut Construction Industries Association, a trade group that promotes tolls as a means to stabilize financing for highway maintenance and modernization, said he is resigned to seeing tolls as an issue that will rise or fall strictly on Democratic votes.

“You have to work with the people you can work with until we get an indication they are willing to have a serious discussion,” Shubert said. “It’s a wedge issue.”

One of Lamont’s challenges is the chicken-and-egg nature of developing and winning approval for placing tolls on interstate highways constructed or maintained with federal highway dollars. Connecticut is one of the states permitted to experiment with tolls aimed at reducing congestion with variable pricing,  based on peak and an off-peak travel. The Federal Highway Administration, however, will not sign off on a detailed blueprint until the legislature approved enabling legislation.

Lamont also faces opposition from Democrats over his “debt diet,” a plan to sharply curtail borrowing.

Borrowing for transportation projects is repaid from the Special Transportation Fund, which is supported with fuel tax receipts that are stagnant. The fund is projected to be insolvent within the next decade.

The GOP solution is to increase borrowing for transportation projects by about $700 million per year. But to avoid overtaxing the STF, Republicans would pay off that extra debt from the state’s General Fund.

The problem with that, said Rep. Roland Lemar, D-New Haven, a Transportation Committee co-chair, is the General Fund can’t spare the room on its own credit card. Its borrowing is used to build schools, upgrade universities and wastewater treatment plants, preserve open space and farmland, and support economic development.

The Republican plan “shortchanges literally every aspect of state government,” he said. “It will crowd out every other bonding aspect.”

Lamont also doesn’t want to use the General Fund to pay for transportation work as unaffordable under the terms of his debt diet, creating a short-term gap in transportation funding until tolls are approved. He paused when asked Wednesday if he felt Democrats would support his debt diet.

“They all applauded when I mentioned the ‘debt diet’ in my speech,” he said, referring to his budget address on Feb. 20.

Rep. Carlo Leone, D-Stamford, the other transportation co-chair, was noncommittal after the press conference when it came to Lamont’s debt proposal: “I think the ‘debt diet’ is separate from the tolls issue.”