Majority status has yet to boost CT lawmakers’ campaign fundraising 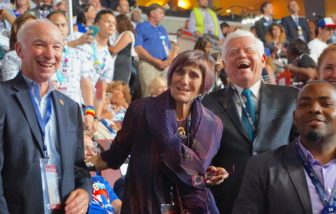 Washington – Their elevation to the majority, and to powerful subcommittee chairmanships, have not given Connecticut’s Democratic lawmakers a boost in campaign fundraising — at least not yet.

But the amount of money they have raised is not higher, and donations from political action committees are actually fewer, than the amount of campaign cash the lawmakers raised during the same period two years ago.

Larson, who is the chairman of the Social Security subcommittee of the House Ways and Means Committee, raised $104,000 from political action committees in the last quarter. In the first quarter of 2017, Larson raised nearly $117,000 from PACs.

Both Larson and Courtney are spending part of a two-week break on a congressional delegation trip headed by House Speaker Nancy Pelosi to Britain and Ireland.

It was DeLauro who reported raising more money than any member of Connecticut’s delegation to the U.S. House this year. She started the quarter with less than $17,000 in her campaign war chest, but raised $202, 587 in the first three months of the year, about $69,000 from PACs, and ended the quarter with nearly $140,000 in cash on hand.

Like her Connecticut colleagues, DeLauro, who is now a “cardinal” or chairman of an Appropriations subcommittee, raised more money from PACs, nearly $86,000, during the same period two years ago.

“Joe is grateful for the strong support that has helped build one of the highest levels of cash on hand in the Connecticut House delegation,” said Nick Boreen, finance director for Courtney’s campaign. “As we move into the next election cycle, we will continue to build on that record of support.”

Rep. Jahana Hayes, D-5th District, who is starting her congressional career this year, raised $161,118. Although she’s said she’s been too busy to spend much time on fundraising, Hayes raised $70,000 from PACs, many of them from teachers’ unions and other labor groups.

About half of the money that came from individuals, some $43,902, was donated by supporters who gave less than $50 and did not have to be identified individually under FEC rules.

“I could not be more pleased about our first quarter numbers,” Hayes said in a statement. “We raised over seventy-five percent of our contributions in just four days.”

“I’m so grateful for the help from a number of my congressional colleagues,” Hayes said.. “They understand the importance of my work for the people of Connecticut’s Fifth District and their confidence in me is humbling.”

Still, Connecticut's lawmakers are raising, and spending a lot on their campaigns.