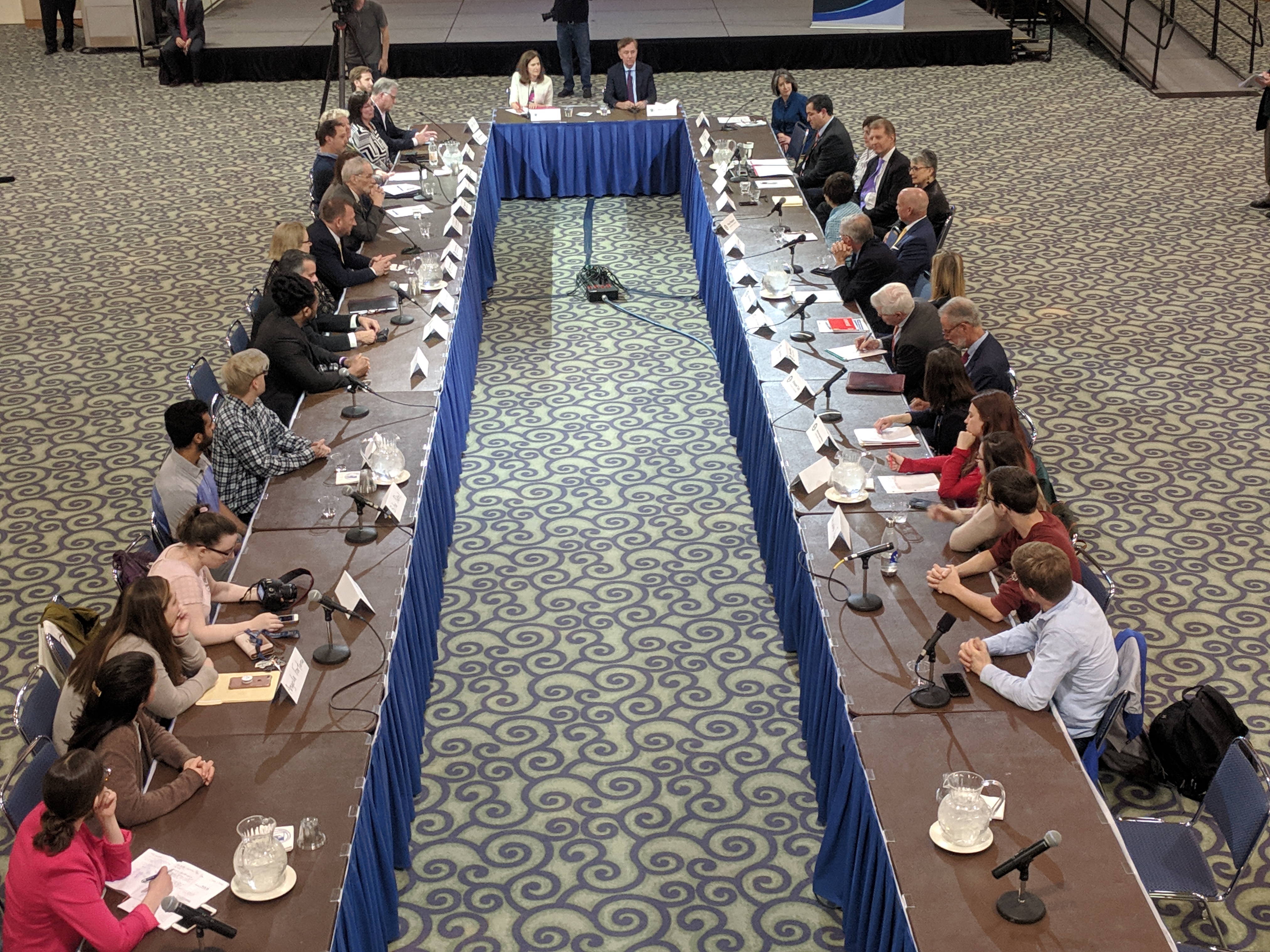 Gov. Ned Lamont and Lt. Gov. Susan Bysiewicz at the head of the table with some of their transition committee policy leaders.

New Britain — Franklin Delano Roosevelt won passage of 15 laws and outlined significant portions of the New Deal in his first hundred days in office, a marking period that has since bedeviled presidents and governors. Gov. Ned Lamont isn’t comparing himself to FDR, but he nonetheless invited a 100-day evaluation Tuesday.

Lamont and Lt. Gov. Susan Bysiewicz reunited with policy leaders from their transition team in a ballroom at Central Connecticut State University, where Lamont taught as an adjunct professor after selling his cable-television company. His press office billed the event as a roundtable review of the administration’s accomplishments over its first hundred days.

The table wasn’t round, the review perfunctory.

The governor, a Democrat who took office on Jan. 9, has largely populated his new administration. He will reach the hundred-day milestone on Thursday.

Lamont said he has made a recommendation to the school board, declining to share the name. He suggested he has or is about to make an offer for someone to run DSS, an agency that handles a significant chunk of the state budget.

“I want somebody extraordinary there. I look at how big healthcare costs, in particular Medicaid, are to our budget. I need somebody who knows that well, and  we have somebody in mind,” Lamont said. Then he laughed and added, “Now, I gotta see if they have us in mind.”

Lamont won a fight over the confirmation of David Lehman, whose role in the 2008 financial services meltdown as a Goldman Sachs partner was an issue, as his special adviser on the economy and his commissioner of economic and community development.

He has won passage of no legislation of lasting impact, which is hardly noteworthy. The Connecticut General Assembly rarely tackles major bills until May, and much of any governor’s agenda is tied to the budget, which cannot be passed until the state evaluates its tax revenues at the end of April.

Lamont enjoyed one early legislative victory: Just weeks after taking office, he brokered a bipartisan deal to help federal workers going unpaid due to the government shutdown. At his urging, the legislature passed a bill pledging the state as the backer of loans from private financial institutions to the employees. The shutdown soon ended.

But major initiatives such as a plan to stabilize transportation funding with a comprehensive system of highway tolls and greater regionalization of back-office education and municipal functions quickly flamed into partisan issues. With his tolls proposal, Lamont reneged on a promise to impose highway tolls only on trucks.

“At the end of the day, he is trying to put a good face on what has been an utter disaster,” said J.R. Romano, the state chairman of the Republican Party.

Lamont’s leadership style — he talks about a big table and an open door — is both welcoming and alarming to legislators.

Lawmakers welcome a more congenial approach after eight years of dealing with Gov. Dannel P. Malloy, who typically took a hard line in negotiations. But legislative leaders, particularly in the House, need to play off a governor’s position in negotiating the final details of controversial bills 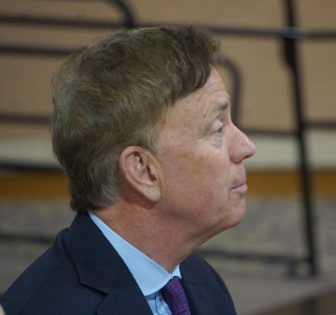 Lamont has yet to fully define what he will and won’t accept in legislating a paid family and medical leave program. The governor has set some parameters — it would be funded by a half-percent payroll tax on employees and provide 12 weeks of coverage. He has expressed a preference for a privately managed program, a stance opposed by public-sector unions.

“What I have said is I don’t want to rule anything out,” he said. “I want to manage this in a way that has the highest quality at the least cost to the taxpayers and give people confidence the benefits are going be there when they’re needed.”

Whatever the legislature passes, it must be actuarially sound — producing a reliable benefit for a tax that does not exceed one-half of one percent. Lamont sees that as a bright line legislators know they should not cross.

“So I’m being pretty strict,” Lamont said. “I like to do progressive things in a conservative way that you can count on.”

Lamont said he also has been clear on taxes — he will not accept an increase in income tax rates, but he would raise more revenue by expanding the base of goods and services that are subject to the 6.35 percent sales tax.

“My number one priority is to get an honestly balanced budget on time that begins to deal with our long-term issues and gives people confidence our commitments are going to be held,” he said. “Number two, I’ve got to fix this transportation system. I heard that from every business leader I talk to. It’s driving jobs out of the state.”

Lamont said he remains convinced that the only solution is tolls.