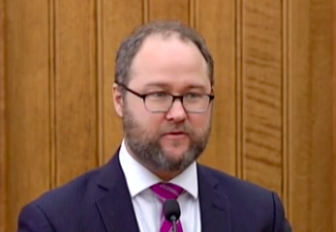 Gov. Ned Lamont used his first cabinet meeting and lots and lots of hyphens Monday to publicize a plan to transform state government into a cross-agency, data-driven, user-friendly, cost-effective and outcome-obsessed model of stream-lined efficiency and private-sector discipline.

“It’s my goal to make Connecticut one of the nation’s most cost-efficient, data-informed, results-driven states,” said Lamont, the founder and former owner of a small cable-television company. “Taxpayers deserve it and businesses expect it.”

David Wilkinson was introduced as the state’s new chief performance officer. He was the director the White House Office of Social Innovation and Civic Participation under President Barack Obama, the commissioner of early childhood under Gov. Dannel P. Malloy, and the leader of a technology group for the Lamont transition.

The new effort, Wilkinson told the governor and agency heads, is “an opportunity to generate more value with the dollars we currently spend.”

Wilkinson has been based for weeks at the Office of Policy and Management, where he reports to Secretary Melissa McCaw. He is tasked with helping Josh Geballe, the former IBM executive and tech entrepreneur named as commissioner of administrative services, make an unwieldy state bureaucracy agile and efficient. 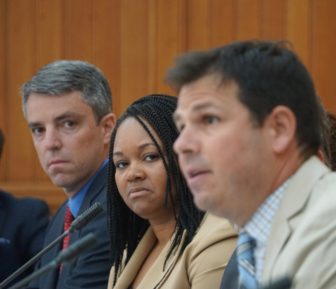 Lamont has hired from the private sector: Geballe at DAS, David Lehman of Goldman Sachs at economic and community development, and Sibongile “Bongi” Magubane at the Department of Motor Vehicles.  Geballe said one of his key assignments is to modernize the state’s information-technology infrastructure to create a “digital front door” to government.

Interacting with government should come with the same ease of digital banking and shopping, Geballe said.

Magubane, a former information-technology executive at Aetna, told her fellow commissioners about her to-do list for the next 90-days, but Lamont pressed for a more ambitious picture.

“Tell me about five years. What does DMV look like?” Lamont said.

“You are sitting in your bed with your pajamas on, and you are scheduled to update your license or your registration. You receive an email that says, ‘Hey, you are going to be visiting us. Let’s make sure you have to the right information.’ ”

For many transactions, she said, the goal would be to get to completion online.

“And you don’t have to even visit us,” she said.

Some that happens now. More of it will be available in the next two years, she said.

She told Lamont she is meeting Wednesday with Geballe to talk about his e-government initiative.

“This starts with setting goals and following through,” Wilkinson said.

The administration is developing a digital tool for use by Paul Mounds, the chief operating officer, and others to track cross-agency objectives. Wilkinson called it “an ongoing accountability tool for all of us” and an at-a-glance “project indicator” for senior officials.

The Commission on Fiscal Stability and Economic Growth asserted in a study last year that it might be possible to wring $1 billion in efficiencies out of state finances, savings equal to about 5 percent of the General Fund budget. 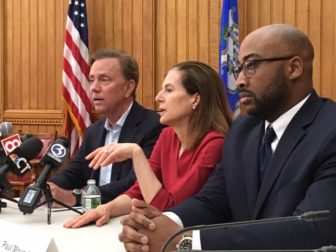 Lamont’s team is attaching no savings number to the new initiative, though Wilkinson said the state’s budgetary issues are both a challenge and an opportunity.

“This is our best chance to move the needle on things we care about most,” Wilkinson said.

The first cabinet meeting was stilted. With reporters watching, every agency head took a moment to introduce themselves and lay out their immediate goals.

Lamont told them to get used to the meetings, with one difference: “We‘ll be doing this more regularly — and more privately — as time goes on.”

The timing of J.R. Romano's resignation, delivered Tuesday night, inevitably links it with the second impeachment of President Donald Trump.

Lamont does a Zoom speech, then gets a new hip