Back from Middle East, Murphy has concerns about peace there 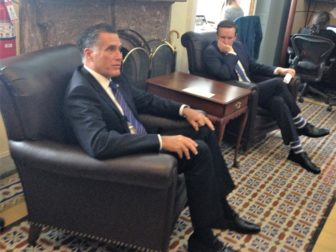 Sens. Chris Murphy and Mitt Romney hold press conference on their trip to the Middle East.

Washington –Sen. Chris Murphy has returned from a five-day trip to the Middle East with Utah Sen. Mitt Romney with the “sense” that Israel’s Muslim neighbors have “low expectations” for the Trump administration’s peace plan for the region, which has yet to be unveiled.

Murphy said “it felt to be a very odd time” in Israel since the Trump peace plan, called “the deal of the century” by the Israelis, is an unknown.

White House senior adviser and Trump son-in-law Jared Kushner, who is in charge of the project, has said the peace plan will be unveiled sometime after the Muslim holy month of Ramadan, which ends June 5.

That plan, however, may not include the “two-state solution” that would give Palestinians full statehood. The two-state solution has been rejected by Netanyahu, who has pledged to begin annexing illegal Israeli Jewish settlements that stretch deep into the West Bank.

“There’s anxiety in the region that [the two-state solution] is slipping away,” Murphy said. “Yet I don’t know that there’s a better answer.”

Murphy criticized the Palestinian leadership for rejecting U.S. aid and for making payments to the widows and children of terrorists killed in action.

Murphy said the United States should prod Riyadh. “I imagine there are some chits it can call in,” he said.

Romney said a partnership between Saudi Arabia and Iraq “should be like two magnets coming together.”

During their visit to Jordan, Murphy said there is concern the Trump peace plan would cause unrest. “Everybody is guessing what’s in it,” he said.

One thought on “Back from Middle East, Murphy has concerns about peace there”