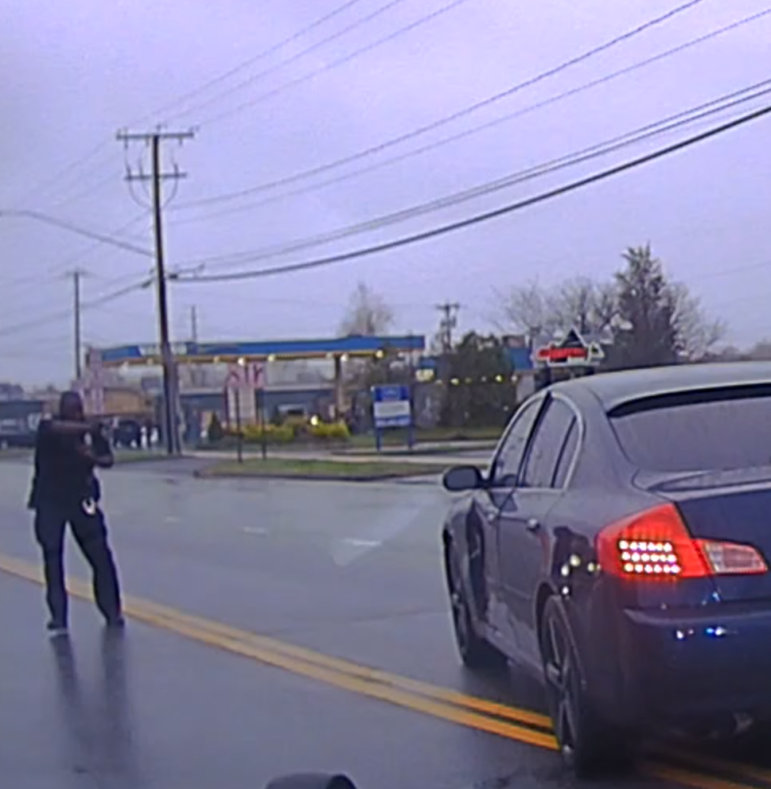 A Wethersfield police officer fires into a car.

Many police experts advise don’t do it. Some departments prohibit it. But twice in recent weeks, a police officer in Connecticut has fired into a motor vehicle, killing a driver in Wethersfield, wounding a passenger in New Haven — and fueling a push in Hartford for legislation addressing the use of force.

Sen. Gary A. Winfield, D-New Haven, the co-chair of the Judiciary Committee, said Friday he expects to have a draft next week of a bill that would expand the mandatory dissemination of data on the police use of force in Connecticut and provide statutory limits on firing at moving motor vehicles.

The recent shootings were captured on high-resolution videos, with the Hartford State’s Attorney releasing three views of the Wethersfield shooting on Friday. One shows a police officer stepping in front of a vehicle after a chase on April 20, firing twice when the teenaged motorist tried to drive away.

Winfield said he appreciated the quick release of the video, something that has not always occurred while an investigation is open. It makes the case for why police should not fire at a moving car, he said.

“You see things that disturb me. This is escalation. This is not de-escalation of the situation. I think that is problematic,” he  said. “That’s why the bill I am working on, I’m looking at this very thing. We should be very clear that when you shoot at a motor vehicle, you put yourself and others in danger.”

That is the policy adopted by the New York City Police Department in the early 1970s and emulated by the other departments in the ensuing decades. But the shootings continue, even in jurisdictions where departmental guidelines advise against them or prohibit them.

Between January 2015 and May 2017, the Washington Post found,  police shot at least 193 people who were inside vehicles. In 76 cases, the person killed was not armed and only the vehicle was considered the weapon. In 17 of those cases, the person shot was fleeing.

Chuck Wexler,  the executive director of the Police Executive Research Forum, said the admonitions against shooting into moving motor vehicles in other than extraordinary circumstances are widely accepted as good public policy and smart police tactics. He is unaware of any state placing such a prohibition in law.

“It doesn’t mean it hasn’t happened. I’m not aware of where it has been legislatively mandated,” Wexler said.

Wexler was wary of a simple prohibition in law, as opposed to a policy that changes how police officers are trained and the standards that are set for them.

“I guess I’m of the mind it’s best when departments implement this, because when you implement it, training should accompany it. It’s not just about the law,” he said. “It’s about explaining why this policy has stood the test of time and saved the lives of officers and citizens alike.”

Wexler said that doesn’t mean a statewide standard would be inappropriate.

“I think any way that Connecticut can make this policy happen throughout the state is going to be better for police officers and citizens alike,” he said. “But I think the best way to do that is through the training and expecting officers to be given this training so they understand what to do in certain circumstances.”

James Cetran, the president of the Connecticut Police Chiefs Association, could not be reached late Thursday or Friday to respond to Winfield’s planned legislation. He also is the chief of police in Wethersfield, where he declined to comment about the video.

“The video speaks for itself,” he said. “I’m glad for the transparency.”

On April 16, a Hamden police officer responding to a report of a robbery pursued a car into New Haven and fired into the passenger’s side door window, wounding a passenger. The couple was unarmed. The mayor of Hamden said after viewing video of the incident he was ready to recommend termination of the officer.

The legislature has a history of addressing police accountability issues in the aftermath of highly publicized incidents. In 2015, the legislature passed a law requiring mandatory reporting about the use of tasers, a response to the death 23-year-old Jose Maldonado. He was shocked in the chest by a taser during a scuffle with police in the East Hartford police lockup, and an autopsy concluded the cause of death was cardiac arrhythmia due to electric shock.

“I think the legislature still has plenty of time to explore issues that were vetted over the last few years,” said David McGuire, the executive director of the American Civil Liberties Union in Connecticut. “The  2015 omnibus excessive force legislation didn’t solve the problem of accountability and transparency abou the police use of excessive force.”

The use of tasers is reported to the state, but state law only requires that other uses of force be documented locally.

“Inexplicably, there is no requirement they submit that data,” McGuire said.