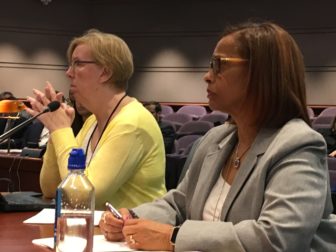 House Democratic leaders said Tuesday they intend to call a vote tomorrow on a bill gradually raising the $10.10 minimum wage to $15 over four years, but some lawmakers continued to wrangle over how the measure should apply to young summer help and restaurant workers who largely rely on tips.

Democrats on the Appropriations Committee endorsed a minimum-wage bill on a 32-19 party-line vote Tuesday, clearing the way for House action on a revised version negotiated with the administration of Gov. Ned Lamont, a Democrat who has insisted on changes easing the impact on businesses, particularly restaurants.

The bill approved by Appropriations would raise the minimum wage to $15 in just three years, requiring a jump of $1.90 in the hourly minimum to $12 on Jan. 1. But Democrats have acknowledged for months that Lamont would prevail on a four-year implementation, bumping the minimum to $11.25 in January, followed by increases of $1.25 in each of the following three years until reaching $15 in 2023.

Lamont wanted to expand a provision of the minimum-wage law that allows a lower training wage for a limited period. Under a compromise, legislators said, the lesser wage would be limited to workers ages 16 and 17,  allowing businesses to pay young help a wage 15 percent less than the minimum for up to 90 days.

“This is a work in progress,” said Sen. Cathy Osten, D-Sprague, the co-chair of Appropriations.

Still under negotiation was whether language favored by the administration would dictate how the minimum wage would apply to wait staff and bartenders, who receive tips. House Democrats emerged from an early-evening without final language on the tip credit, but House Speaker Joe Aresimowicz, D-Berlin, said he still expected a floor vote on Wednesday.

Aresimowicz had declared before the Appropriations meeting began that regardless of whether the committee endorsed a bill on Tuesday, the full House would debate a minimum-wage increase bill on Wednesday.

The bill approved by the Appropriations Committee is the version developed by the Labor and Public Employees Committee. Intended as a counter-offer in negotiations with the administration, it would have raised the minimum wage from $10.10 per hour to $15 per hour in three annual increments starting next January and finishing in January 2022.

Another component of the revised measure would align the new minimum wage with the Consumer Price Index after January 2023, allowing for annual adjustments to reflect changes in inflation without legislative action.

“The lower-paid workers in the state shouldn’t have to look to the State Capitol each and every year for a raise,” Aresimowicz said.

“Do you happen to know a time in recent memory when the CPI went down?” she asked.

“It’s going to bankrupt them,” said Sen. Craig Miner, R-Litchfield, referring to the original three-year implementation schedule. “This is too far, too fast.”

It also has been off the table for months, according to Democrats involved in the negotiations. 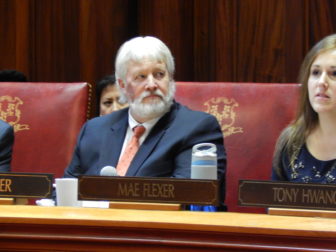 “I feel like this is a working document that’s not finished,” said Sen. Heather Somers, R-Groton.

But many Democrats on the committee joined the speaker’s argument that Connecticut has allowed its minimum wage to lag behind the cost of living for far too long.

Assuming an individual earning the $10.10 minimum wage works 35 to 40 hours per week, they would exhaust all of their funds just covering rent and food costs, said Rep. Toni E. Walker, D-New Haven, the other co-chair of the Appropriations Committee. “That doesn’t leave room for any quality of life I know of.”

But some Democrats did push for further modifications to the minimum wage measure. Osten said she’s worried that unless some accommodation is made, restaurants and other small businesses could be harmed.

And Sen. Joan Hartley, D-Waterbury, said the measure should reflect, in some fashion, Connecticut’s slow recovery from the last recession. “It must be formed in the overall conversation of where we are as a state,” she said.