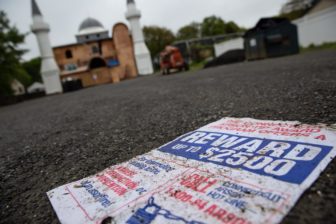 A poster offering a $2,500 reward for information about the burning of a New Haven mosque lay in the mosque’s parking lot on Tuesday.

With an arson at a New Haven mosque still fresh in the news, legislators on Tuesday said they are pressing to include $5 million in the state bonding package for stepped up safety measures at Connecticut houses of worship.

The fire, set during the holy month of Ramadan, severely damaged the three-story structure on Middletown Avenue Sunday and prompted a federal investigation after authorities confirmed the blaze had been intentionally set.

No one was injured, but the Diyanet Mosque was rendered uninhabitable.

“Here we are having another conversation about the hate and how it’s manifesting in our society,” said Sen. Saud Anwar, D-South Windsor, who has claimed to be the first Muslim member of the General Assembly. “We’ve come to a point where the places that are a source of harmony, a source of comfort and tranquility have become places where people go with fear.”

Leaders of churches, mosques, synagogues and other religious institutions would be able to apply for a portion of the $5 million as early as July. They would have to make a case for how the money could be spent, such as on security cameras, bulletproof glass or additional doors or vestibules.

The program would be modeled after a school security initiative created in the wake of the Sandy Hook Elementary School shooting, which sets aside money for enhanced security infrastructure at public and private educational facilities.

Lawmakers condemned the latest incident in a string of attacks and threats against religious centers. In October 2018, 11 people were killed and seven injured in a mass shooting at the Tree of Life Synagogue in Pittsburgh. In March, 51 people were shot and killed in attacks at two mosques in Christchurch, New Zealand. And last month, a man walked into a Poway, Calif., synagogue and shot four people, killing one of them. 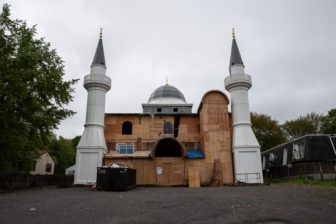 Fire damage at the Diyanet Mosque in New Haven, two days after a blaze that officials now say was intentionally set.

Locally, bomb threats were called into Jewish community centers in West Hartford and Woodbridge in January amid a nation-wide hoax, and in March someone threatened to burn down the Muhammad Islamic Center of Greater Hartford, frightening its members with racial and homophobic epithets.

“It’s a sad statement about where we are as a society that we have to talk about bonding for security upgrades for our houses of worship, but it is absolutely necessary,” Sen. Derek Slap, D-West Hartford, said. “Nobody should be afraid to go to their synagogue, to go to their mosque or to go to their church.”

Five million dollars is a relatively small amount considering that the General Assembly routinely authorizes hundreds of millions in new borrowing through bonding every year. But things could be more difficult this year because Gov. Ned Lamont has asked lawmakers to accept a “debt diet” and cap borrowing requests at just below $1 billion.

Still, Anwar said Tuesday, “It’s an important time for us as a society to stand up and say this is not going to be acceptable. We have a responsibility to stand up.”