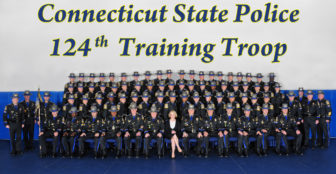 A new contract granting state police raises and a paid lunch break tops a list of six new labor deals that would cost $58 million collectively by 2022 — and also could throw a last-minute wrench into state budget negotiations.

As legislators and Gov. Ned Lamont struggle to craft a new biennial budget — and avert a multi-billion-dollar projected shortfall, five tentative contracts and one arbitration award would add $32 million in new costs over the next two fiscal years alone.

The Senate chairwoman of the legislature’s Appropriations Committee said state officials have been squirreling away funds to cover those raises, at least for the upcoming two-year budget cycle.

But the top House Republican on the committee said Connecticut simply can’t afford those raises, especially when Gov. Ned Lamont and his fellow Democrats in the legislature are proposing hundreds of millions of dollars in new tax hikes.

“It’s not a question of do they deserve it,” Rep. Gail Lavielle, R-Wilton, said of the arbitrator-endorsed raises for police troopers as well as five tentative deals proposing raises for several other groups of state employees. “We don’t have it.”

The lion’s share of the potential additional costs involves an arbitration award that provides for a new four-year deal for the police union.

The award, which still must be considered by the legislature, would be retroactive to the start of the current fiscal year back on July 1, 2018, and would run through June 30, 2022.

The award would cost the state $46.2 million across four fiscal years, according to Lamont’s budget office, including $25.2 million over the next two fiscal years combined.

The most costly change involves the 30-minute meal break troopers currently receive, changing its status from unpaid to paid from this point forward.

This would cost the state between $4 million and $4.4 million in each of the next four fiscal years and its value exceeds the cost-of-living adjustments and step increases — combined — that troopers also could receive.

According to the arbitration award, troopers must be available to be contacted and dispatched during their meal, and also must take the break within their respective patrol areas.

The union has a lawsuit pending against the state regarding the current conditions of the meal break, and this award — if ratified by the legislature — would resolve that dispute, said Sen. Cathy Osten, D-Sprague, co-chairwoman of the Appropriations Committee.

“We still have to pay our workers,” Osten said, adding that she favors ratifying the troopers’ union award as well as endorsing five other tentative contracts negotiated by the Lamont administration. “Many of our workers have not seen a pay increase in years.”

Osten said the state should have about $40 million left in a special reserve account for employee raises when this fiscal year ends on June 30. The plan is to carry those funds forward into the next two-year budget cycle to cover the cost of raises for troopers and other unionized employees.

Besides being paid during the meal break, the arbitration award also calls for police to receive a 2 percent cost-of-living raise next fiscal year and a 2.25 percent hike in both 2021 and 2022. Members not at the top of the pay scale also would be eligible for step increases each year.

Arbitrator James W. Mastriani wrote that police have been stretched much thinner in recent years.

“The current staffing levels have substantially diminished from the levels of three years prior,” he wrote. The union includes 881 troopers, sergeants and master sergeants this year, compared with 1,075 three years ago.

Andrew Matthews, executive director of the Connecticut State Police Union, could not be reached for comment Wednesday afternoon.

Mastriani awarded no cost-of-living adjustment or step increases for troopers for the current fiscal year, noting that many state employees forfeited raises from 2017 through 2019 as part of a concessions deal ratified two years ago.

The troopers’ union also had declined to provide wage concessions when most other bargaining units had in 2011.

The Lamont administration did not comment for this story.

Lavielle noted that Lamont also has not weighed in on several other labor deals granting raises that went before lawmakers this year.

“Maybe he doesn’t want to see them go down,” she said. “Maybe he’s thinking about politics and not what this state can afford.”

Most of these involve very small bargaining units, including some newly unionized groups seeking to join larger units.

These agreements call for 3.5 percent cost-of-living raises in each of the next two fiscal years for unions representing: