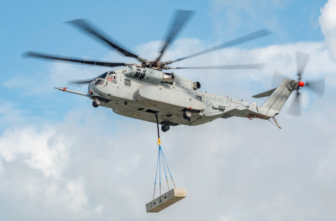 Washington – Connecticut lawmakers on Friday praised the signing of a new contract between the Navy and Sikorsky to build an additional dozen “King Stallion” heavy-lift helicopters, a deal valued at $1.3 billion.

The entire Connecticut delegation issued a statement saying the new contract to produce more CH-53 King Stallion helicopters “is great news both for our Armed Services and Connecticut’s workforce.”

The Malloy administration said the deal would “retain and grow approximately 8,000 jobs at Sikorsky Aircraft until 2032, keep the Sikorsky headquarters here in Connecticut, and increase investments in in-state suppliers.”

Over the next two decades, the Navy hopes to purchase 200 CH53K King Stallion helicopters, which are used by the Marines. The total cost of the program is expected to exceed $30 billion.

The CH-53K is designed to carry 27,000 pounds of payload  — three times as much as the heavy lift helicopter it is replacing — over a distance of up to 110 nautical miles. It is designed to be the most powerful helicopter in the Pentagon’s fleet.

But there have been problems with the King Stallion program.

Several design deficiencies have delayed operational testing, and those helicopters may not be delivered to the Marine Corps until at least 2021, according to the most recent U.S. Defense Department Director of Operational Test and Evaluation’s annual report.

While the new contract is good news for Sikorsky, Congress – with its authority over defense funding — will determine how quickly the next group of King Stallions are rolled off Sikorsky’s production line.

“We will continue to fight for additional funding – and the high-skilled, good-paying jobs in Connecticut that these investments support – to ensure the Marine Corps gets every CH-53K they need for to complete their mission in the years ahead,” Connecticut’s lawmakers said in their joint statement.