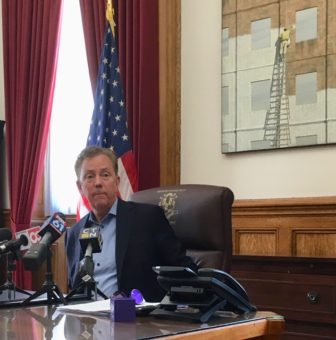 Gov. Ned Lamont: “I will veto the bill as currently written.”

Gov. Ned Lamont’s quietly simmering argument with labor progressives over the appropriate role of private insurers in a proposed state-mandated paid family and medical leave program boiled over Wednesday with a dramatic veto threat as the Senate prepared to debate the issue.

The Senate opened debate on the bill at 2:12 p.m., but its leadership portrayed that as an act of necessity, not defiance. With only two weeks left in the session and Republicans opposed, they said the Senate needs to pass and get the bill to the House. Lamont’s concerns could still be addressed in another bill before the session ends at midnight June 5, avoiding a veto of a measure that was central to the governor’s campaign and his support by labor.

“The really good news here is that we agree — with the governor, with the House — on the fundamental elements of this bill,” said Sen. Julie Kushner, D-Danbury, a co-chair of the Labor and Public Employees Committee. “This bill will provide working families with time off to take care of their kids with wage replacement, so that they don’t have to pick between their family members and a paycheck.”

The legislation before the Senate is a compromise that would place the family-leave program under the control of a quasi-public authority, one of Lamont’s requests. But the governor said the structure of the proposed Paid Family and Medical Leave Insurance Authority was so unwieldy that it would repel private insurers, leaving it to be run by the state bureaucracy by default.

The rift exposed a fundamental tension in Lamont’s politics: He is a Democrat cross-endorsed by the union-financed Working Families Party, publicly committed to paid family and medical leave and signing the recently passed $15 minimum wage. But he also is a Greenwich businessman with a Yale M.B.A., hailing from a world with a healthy mistrust of government.

“Coming from my life as a businessperson, I’m going to do things in the most efficient way possible,” Lamont said. “I want to do big, bold progressive things, but sometimes I’ll do things in a conservative way, in a way that gives taxpayers a high degree of confidence that we know what we’re doing, that we take their tax dollars seriously.”

While Senate Democrats were conciliatory, the blowback from a prominent figure in the progressive labor movement was immediate, blunt and personal.

“This guy asked for our votes, the voters of Connecticut,” said Lindsay Farrell, the executive director of the Working Families in in the state. “We actually assumed he wanted to run government well when he asked for our votes. Now, he is trying to pass it off to somebody else, so they can make a profit.”

Farrell said the governor should be looking to create an important benefit for more than one million workers in Connecticut.

“He only sees it as dollar signs for the insurance industry, and that is heartbreaking,” Farrell said. 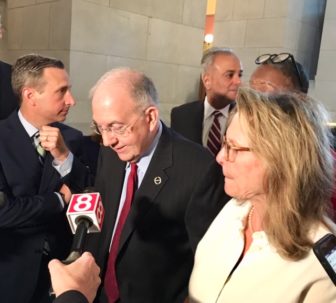 Lamont said he is open anyone running it, so long as there is a fair process. But he also expressed skepticism about state government starting up and running a $400 million insurance business.

“I want to make sure it’s a process where we invite the best and the brightest to bid on this, folks who have done it before, be that in the private sector, the public sector, DOL,” Lamont said. “Let’s have a fair process. Let’s take a look, and let’s give the taxpayers a great deal of confidence this brand-new $400 million program is operating the way it’s supposed to operate.”

The bill was expected to clear the Senate late Wednesday night on a party-line vote and go to the House of Representatives. Democrats control the Senate, 22-14, and the House, 91-50. No Republican was expected to vote for the bill, and the GOP offered a more limited alternative that would be voluntary.

A failure by Lamont and the Democrats to resolve their differences could have broader implications as the administration is seeking support for highway tolls, while blocking legislative progressives from seeking higher taxes on capital gains accrued by the rich, single taxpayers earning at least $500,000 and couples making $1 million.

The Democrats’ bill would place Connecticut in the ranks of states, including neighboring New York, Rhode Island and Massachusetts, to mandate a form of disability insurance.

At annual costs ranging from $156 for minimum-wage workers to a maximum of $664.50 for those with six-figure incomes, it would provide up to 12 weeks of wage replacement during any 12-month period for workers who fall ill or need to care for family members. Two additional weeks would be available for a serious illness resulting in incapacitation during a pregnancy.

If the bill becomes law, benefits would become payable on July 1, 2021.

Payroll subjected to the new tax would be based on the amount of annual earnings subject to Social Security taxes, currently $132,900. Benefits would be calculated on a sliding scale, according to income.

A worker earning $600 a week would receive benefits equal to 95 percent of wages, or $570. The rationale is that someone working close to minimum wage could not afford to take leave without getting close to current wages.

Total weekly compensation could not exceed 60 times the minimum wage. With a $15 minimum wage expected to take effect in 2023, that would yield a maximum weekly benefit of $3,600.

Disputes over whether is a worker is eligible would be resolved by the state Department of Labor, pursuant to a memorandum of understanding with the authority.

The plan has been reviewed by actuaries, but in the case of a shortfall the  authority is required to reduce the benefit by the minimum amount necessary to ensure solvency.

Kushner, a recently retired UAW regional executive who unseated a conservative Republican last fall, said there was ample time to address the governor’s concerns: There is a year and a half before the payroll tax is collected. 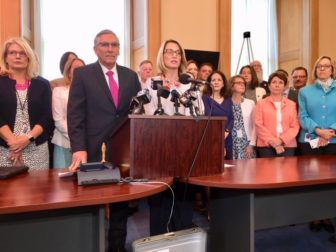 “When it comes to the administration [of the program] we all want the same thing,” Kushner said. “We want it to work well for the people of Connecticut. We wan it to be efficient and cost effective. We have some disagreements on how to get there.”

Republicans countered Wednesday with a less ambitious alternative: Setting standards for short-term disability and family-leave coverage policies to be offered by insurers. They said they did not know what such a policy would cost.

At a press conference and during the Senate debate, Republicans said they supported the concept of paid family and medical leave, but not one envisioned by Democrats and now a matter of public policy in surrounding states.

“Unfortunately, the Democrats’ proposal that we’ve seen is a payroll tax, plain and simple — a payroll tax that you cannot opt out of, you have no choice,” said House Minority Leader Themis Klarides, R-Derby.