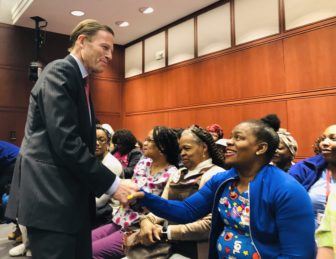 Sen. Richard Blumenthal greeted nursing home workers last month who who had threatened to strike if funding for wage increases was not included in the state budget.

The state’s largest health care workers’ union has again called off a threat to strike, following a move by Gov. Ned Lamont’s administration to increase rates for nursing homes over the next two years.

The New England Health Care Employees Union, District 1199 SEIU, said 4,000 of its members spread across 43 nursing homes have been working for nearly two years under expired contracts. About 3,100 members at 25 of those homes threatened to strike on June 3 if a deal had not been reached.

On Friday, more than 1,000 caregivers reached an agreement for a new contract with iCare facilities. The deal runs retroactively from March 2017 to March 2021, with “significant” wage increases each year between November 2018 and January 2021, union officials said. The workers also will receive new health care, training and vacation accrual benefits, though leaders would not provide specifics, citing ongoing negotiations for the remaining 2,000 or so employees.

“This is a major victory for our union members who are truly deserving of these wage raises and improved benefits,” said Rob Baril, president of District 1199. “We feel proud of this achievement, and we are confident that we’ll be able to settle all pending contracts for our members in the near future.”

The Lamont administration is negotiating a new state budget with legislative leaders to cover the next two fiscal years. The goal is to resolve that plan before the regular 2019 session ends on June 5.

A union spokesman said Friday there is a provision in the contract that would invalidate the deal if lawmakers refuse to build the rate increases into the budget.

Lamont originally had recommended no additional funds for nursing homes in the two-year spending plan he released in February.

“We thank our members for standing up for their rights and engaging in political action to make this victory a reality,” Baril said Friday. “We also want to recognize our state leaders in the General Assembly and Gov. Ned Lamont for following through on their promises of fair wages and benefits.”