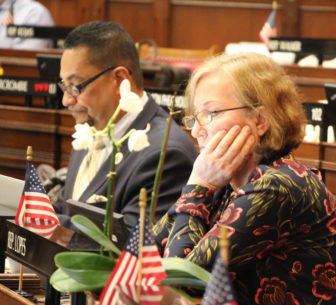 After a second lengthy debate in the span of six days, the House passed a bill Tuesday that would require climate change to be taught in public schools.

Rep. Christine Palm, a lead proponent of the proposal, championed its resurrection after it was cut from a bill last week that included a requirement for all school districts to offer a course in African American, Puerto Rican and Latino history. That bill was passed by the House last Wednesday.

On Tuesday, Democrats used another bill — one that was no longer needed because it focused on including Latino history in the curriculum — and added a “strike-all amendment,” recycling the bill to hold the climate change curriculum requirement.

The bill codifies the requirement for teaching climate change included in the Next Generation Science Standards. The standards, which are already adhered to in schools, were approved by the state Board of Education in 2015 and are part of state statute.

Republicans, who opposed the climate change requirement last week, spoke against it for hours Tuesday, expressing annoyance about how the bill was raised.

Rep. Doug Dubitsky, R-Chaplin, filibustered for an hour and 36 minutes by talking about the history of climate change and railing against the use of the Latino history bill for the climate change proposal.

“For the legislature to do a strike-all amendment on a bill called an Act Concerning Latino American Studies and putting in global warming instead, does a grave disservice to the people of my district,” Dubitsky said, “and the people of the proponent’s district and all other districts. There is no way anyone who is not part of this legislature would have known that this amendment would be attached to this bill with a completely different name.”

The vote of 102 to 44 was largely along party lines, with Democrats supporting it and many, though not all, Republicans dissenting.  The bill will now move to the Senate. If called and passed by the Senate and signed into law by the governor, the legislation would make Connecticut the first state in the country to mandate teaching the topic.

“By putting climate change education into state statute, Connecticut is taking the lead in empowering young people to be part of the solution to a problem they had no hand in making,” Palm said after the bill was passed. “Past generations, including mine, have despoiled our environment, and the current administration in Washington systematically strips out enlightened regulations that had been enacted to protect our land, air and waterways. The least we can do is give our students a chance to salvage what’s left of our natural world.”

Palm sparred with contenders for almost five hours in what largely became a debate over the legitimacy of climate change itself. Reps. Whit Betts, R-Bristol, and David Wilson, R-Litchfield, also voiced concerns that lawmakers should not be legislating curriculum decisions.

“This isn’t about climate change. It’s about overstepping our legislative responsibilities,” Betts said. “[This proposal] is a slap in the face to local boards of education, teachers, and to the kids, quite frankly.”

Rep. Charles Ferraro, R-West Haven, called  for a “fair and balanced” approach to climate change curriculum that offers an alternative to the theory that climate change is linked to  human behavior.

“If this legislation passes and climate change is mandated to be taught by each municipality,” Ferraro said, “I can only hope that the approach to teaching that science will be done in a way that allows our students to get a fair and balanced approach to all sides of the argument for global temperature increase.”

Palm countered such arguments saying, “The preponderance of peer reviewed scientists agree that climate change is caused by human activity. That is what the (Next Generation Science Standards) promotes and this is what science teachers currently teach.”

Rep. Matt Blumenthal, D-Stamford, said “I support this amendment, however I’m a little surprised to be in the chamber today hearing that the subject of climate change is controversial, when in fact it’s not.”