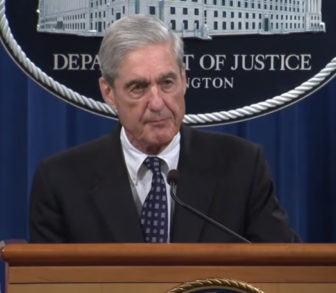 Washington –Even though special counsel Robert S. Mueller III reminded Congress on Wednesday that it had the authority to formally accuse President Donald Trump of wrongdoing by beginning impeachment proceedings, members of Connecticut’s delegation continue to resist that move.

Mueller said Justice Department policy prohibits charging a sitting president with a crime, but said there is another way to formally accuse a president of wrongdoing, a reference to congressional impeachment.

Nevertheless, Connecticut’s House members continue to side with House Speaker Nancy Pelosi, D-Calif., who once again sidestepped the question of impeachment on Wednesday.

“The Special Counsel’s report revealed that the President’s campaign welcomed Russian interference in the election, and laid out eleven instances of the President’s obstruction of the investigation,” Pelosi said in a statement. “The Congress holds sacred its constitutional responsibility to investigate and hold the president accountable for his abuse of power.”

Like Pelosi, members of Connecticut’s Democratic delegation said Wednesday they prefer to continue a series of congressional investigations into the president’s finances and into allegations the Trump campaign colluded with Russia to interfere in U.S. elections. House Democrats are also looking into whether members of the Trump administration tried to obstruct probes into Russian interference in U.S. elections.

“The Special Counsel stated that their decision not to indict was based directly on Justice Department policies that a sitting president cannot be indicted,” said Rep. Rosa DeLauro, D-3rd District. “This is all the more reason Congress should continue its investigative work on these topics—no one is above the law.”

Rep. John Larson, D-1st District, said “the glaring takeaway from Special Counsel Mueller’s report and his remarks today, was the fact that the Russians interfered in our elections and they will do so again, and called for Congress to do more to secure the electoral system.

Larson also said “Congress will hold the Administration to account if they do not cooperate with the ongoing investigations.”

In a 10-minute address from the Justice Department Wednesday, Mueller reviewed the finding of the 448-page report his office released at the end of its two year probe.

He said his team did not find evidence of a criminal conspiracy, even if it did find instances in which members of the Trump campaign colluded with Russian agents.

Mueller also said he could not clear Trump of obstruction, nor charge him with a crime as a sitting president.

“If we had confidence after a thorough investigation of the facts that the president clearly did not commit obstruction of justice, we would so state,” Mueller said. “Based on the facts and the applicable legal standards, however, we are unable to reach that judgment.”

Within hours of Mueller’s statement, explicit calls for impeachment proceedings against Trump came from eight of the 23 candidates Democratic candidates running for president.

“Mueller’s message to the American people is that Donald Trump would be a criminally charged defendant if he were not a sitting president,” Blumenthal said. “Mueller reaffirmed the point made by me and nearly one thousand fellow former federal prosecutors: Donald Trump would be in handcuffs, criminally indicted, but for his being President of the United States.”

While Mueller said he was reluctant to appear before Congress, and eager to return to private life, Blumenthal continued to call for the special counsel’s testimony.

“Robert Mueller should now unquestionably come before Congress to fairly, fully and publicly answer questions about his work and report,” Blumenthal said. “The American people need and deserve to hear from him.”

“It’s clearer than ever that this investigation did not exonerate President Trump,” Hayes said. “The American people deserved to hear Robert Mueller’s unvarnished account of his investigation.”

The president and his advisers downplayed Mueller’s statement.

“Nothing changes from the Mueller Report,” Trump tweeted. “There was insufficient evidence and therefore, in our Country, a person is innocent. The case is closed! Thank you.”