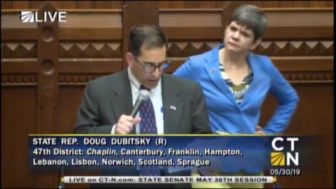 The House of Representatives opened Friday with a dressing down from House Speaker Joe Aresimowicz, D-Berlin, and House Minority Leader Themis Klarides, R-Derby, over what Klarides called an act of disrespect directed at one of her members during a debate the previous night over revisions to the Trust Act.

Rep. Anne Hughes, a liberal Democrat who captured a Republican seat last year, walked behind Rep. Doug Dubitsky, R-Chaplin, a conservative who often annoys his own caucus members by extending debates with repetitious questions. She briefly stopped, hands on hips, and glared at Dubitsky, a moment caught on CT-N.

Others also seemed to make a point of walking behind Dubitsky with the intent of amusing their colleagues. Dubitsky’s politics are anathema to many Democrats, and legislators on both sides of the aisle say they find his debating style unusually pedantic, patronizing and relentless.

“We just walked behind them, you know,” Hughes said in a brief interview. “There’s no good, no excuse. It was perceived as disrespectful, and I apologize for that.”

Klarides said everyone must be respected as they debate, no matter how they are viewed.

Small insults near the end of a legislative session can have large consequences. The constitutional adjournment deadline is midnight Wednesday, and the balance of power tips toward the minority party in the final days.

With the clock and calendar on their side, the GOP caucus can kill a bill or dissuade Democrats from calling one for a vote simply by talking. And talking.

Klarides reminded them of the tools available to each party. With a 91-60 majority, the Democrats can pass bills.

“You certainly use them on a daily basis to pass stuff that I think is reprehensible to the state,” Klarides said. “But the only things we have in the minority is the ability to talk about things and talk about things maybe longer than you would like.”

House Majority Leader Matt Ritter, D-Hartford, said Klarides’ points were heard and understood. Without offering specifics, Ritter suggested that childish or disrespectful behavior is not unique to one side of the aisle.

During a recent debate on banning plastic straws, Big Gulps were in evidence on the GOP side. One lawmaker, who appeared to know he visible on CT-N as a colleague spoke, held his drink in front of him, tugging at the straw with his teeth.

Aresimowicz told lawmakers none of it will be tolerated. His tone of voice was one he most likely employs in his outside job: He is a high school football coach.

“I am the judge of decorum in this chamber.”