On way out, UTC cushions the fallout for Lamont 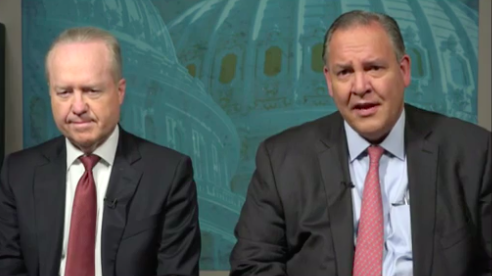 UTC’s CEO, Greg Hayes, right, and Raytehon’s Tom Kennedy on Fox Business. Hayes said, “This is not about Connecticut being a bad place to invest or a bad place to be.”

The venerable roadside burgers-and-dog joint sits on the edge of UTC’s sprawling Pratt & Whitney plant here, long a touchstone for Democrats campaigning for votes or maybe just a little reassurance. Lamont was intent on being seen mixing with unionized workers happy to say that the merger with Raytheon Co. was no big thing.

And he found them, helped by the unions.

Paul Duff, a fourth-generation UTC employee, came down from Collins Aerospace Systems in Windsor Locks, where change has been a constant in the age of mergers and acquisitions. His UTC subsidiary has been Hamilton-Standard, Hamilton Sundstrand, UTC Aerospace and, now, Collins.

Of course, Greg Hayes helped, too. And on Fox Business, no less.

Hayes, the chairman and chief executive officer of UTC, politely shut down Fox host Maria Bartiromo when she suggested that the decision to headquarter the new company on Raytheon’s turf outside Boston might be another example of Connecticut driving away a company with its economic policies.

“Did that have something to do with it? A number of Republicans have been saying, look here is another example of Connecticut and its high taxes driving another major company out to Boston with this merger,” Bartiromo asked. 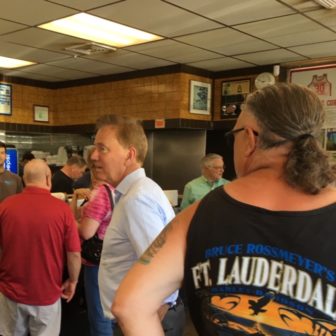 Then Hayes went a step further, repeating a Lamont talking point that the recently passed budget was another step towards fiscal responsibility.

All of that put Lamont in a good mood long before he arrived at Augie & Ray’s, where he would spring for cheeseburgers and dogs, though not the John Larson Special, an egg, cheese, peppers and tomato sandwich named for the congressman. Lamont feigned surprise when greeted by TV cameras in the parking lot.

“I wasn’t planning on a press conference, actually,” said Lamont, laughing. He added, he wanted to “go tell  a few folks how happy Susan and I are that Pratt & Whitney is not only staying right here, but it’s standing right here. And you know why? That’s ‘cause we have the best-trained, most-productive, best-educated work force in the world. And they don’t go anywhere else, but right here.”

Lamont, a businessman elected in November, has tied improving Connecticut’s business climate to modernizing its transportation infrastructure, which he says necessitates a comprehensive system of electronic highway tolls on the Merritt Parkway and Interstates 84, 91 and 95. Legislators declined to bring his plan to a vote in the annual session that ended on June 5.

He will meet next week with legislative leaders to begin talks on whether tolls and other forms of transportation funding can be addressed in a special session.

Asked about Hayes’ comments, Lamont said he saw it as a message to legislators “who have sort of taken this as an opportunity to badmouth the state, badmouth our budget. He said stop, right here and now.”

But Hayes also noted that greater Boston provides a greater talent pool, echoing what everyone from  corporate relocation experts to urban policy analysts have observed: There is a move back to the cities, in part because that is where the next generation of workers want to be. And that is a problem for Connecticut, which has no city with a population of more than 145,000.

“We have to do a better job of bringing our cities to life, and we’re working on that every day,” he said. Pressed for details, he pointed to transportation.

“Let us get going on a 21st Century transportation that has Hartford, New Haven and Bridgeport as transportation hubs” with connections throughout the state, he said.

5 thoughts on “On way out, UTC cushions the fallout for Lamont”